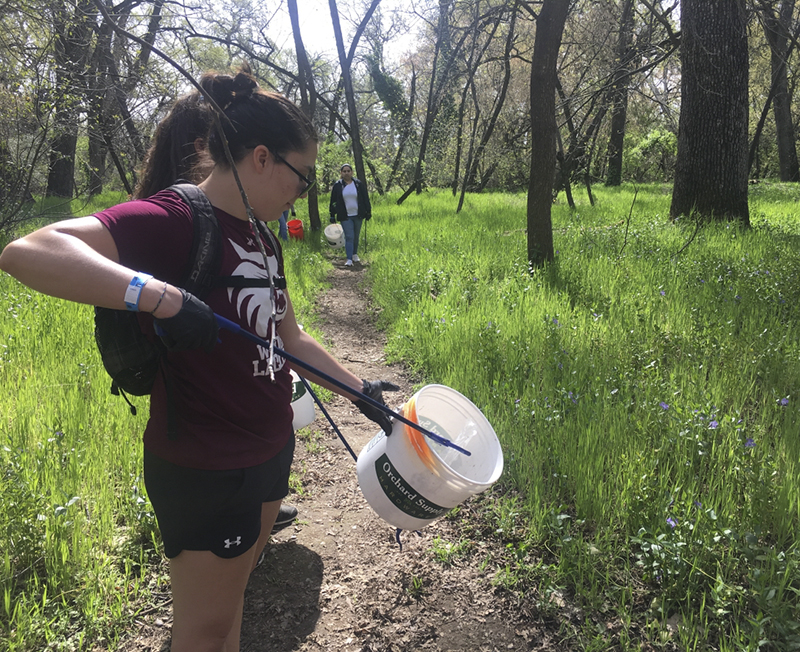 Bettencourt and three of her teammates volunteered for ‘Cats in the Community, an annual service day that Chico State students can participate in during Cesar Chavez weekend. Bettencourt and her teammates picked up trash in the Sherwood Forest area of Lower Bidwell Park.

Q: Why did you decide to do ‘Cats in the Community?

A: We wanted to get a few of our teammates out to do some community service on this day, to put a good name out there for our club and for our school since a lot of people are drinking and stuff. (We wanted) to show that not all of us are doing that. We’re doing something good for the community.

Q: How many people from the lacrosse team are here?

A: There are four of us here and everybody else had practice. We took time out of our practice time to be able to support the community.

Q: What does Cesar Chavez Day mean to you?

A: It’s about helping the community and being supportive of each other, our home and all of the people that live in it. At least with Bidwell (Park), we come here all the time, I come here with my friends all the time. So it’s nice to be able to give back and keep it looking as nice as it is.

Jessica Godinez, co-president of Chico State’s Movimiento Estudiantil Chicanx de Aztlan (M.E.Ch.A.) group, believes educating students on Cesar Chavez is key to the disassociation of the holiday and the party culture surrounding it. M.E.Ch.A commits themselves to supporting struggling community members and uniting La Raza, (Spanish speakers). Godinez who is of Mexican and Salvadoran descent, ultimately hoped Chico State students learned about Chavez’s life and why his birthday is still celebrated years later.

A: I wanted to find my people. People say its diverse, but when I got here, I didn’t see much (diversity).

Q: What goals did you hope to accomplish during Cesar Chavez week events?

A: During the school week we try to educate people on who he was because of a lot people don’t know besides the facts that were in a small section of their textbook.

Q: What do you hope students get out of this holiday?

A: People want to have a purpose to party, so they use Cesar Chavez as an excuse. Know who he is, what he did, and the struggles that came with it.

She encouraged all students, regardless of race or ethnicity, to attend M.E.Ch.A meetings held on Wednesdays at 5 p.m. in Performing Arts Center 116.

Jasmine Cruz, a Chico State sophomore and political science major, spoke about her past and recent Cesar Chavez experiences. Cruz is also the president of the Chico State Political Science Honor Society and is currently running for Associated Students Director of Legislative Affairs.

How do you feel about Cesar Chavez weekend?

I think that Cesar Chavez weekend is an amazing weekend because it is a sunny opportunity for Chico State students to come out, enjoy the (day), and maybe take a small break from their enduring lives as college students.

Is there anything you’d like to see change about Cesar Chavez weekend going forward?

I do want to see some changes going forward. A lot of people try to shun away the bad parts of college, or what they don’t want to see people under the age of 21 do. But these things are present, and these concerns are real. I think specifically the legislative process needs to create some laws that are only going to help college students instead of demeaning their choices in college.

What do you think of Cesar Chavez himself?

I love Cesar Chavez. Anyone who knows me knows that I’m a proud Mexican-American, young Latina woman. Cesar Chavez is certainly somebody that inspires me. As a civil rights activist, he saw what was wrong with the system and actively made a choice to try and change it. Also, a shout out to Dolores Huerta who was just as important, just as much as Cesar Chavez. But, because of the time she was born in, she doesn’t get as recognized.

Shooshanig Berumen a second year Chico State student didn’t focus as much on the cultural aspect of the holiday but rather took the extended weekend as a chance to party.

Q: Do you know who Cesar Chavez is?

A: He was a Mexican-American that fought for the rights of Mexcian farm workers because of the terrible conditions they were working in

Q: What did you celebrate this past weekend?

A: I’m celebrating a three day weekend, not what Cesar Chavez did

Q: How did you celebrate the three day weekend?

A: I love day-fading and this is probably the only time people day fade.

Q: How do you think this holiday is perceived by other students?

A: Some students take it more seriously. Some don’t like it that we celebrate it because of cultural appropriation, but the majority of the students just use it as another excuse to party since we couldn’t do it on St. Patrick’s day this year.

Lizzie Helmer, Mat Miranda, Grayson Boyer and Roberto Fonseca can be reached at [email protected] or @theorion_news on Twitter.