Over 140 Chico State students joined hundreds of CSU students to advocate for more school funding from the state. 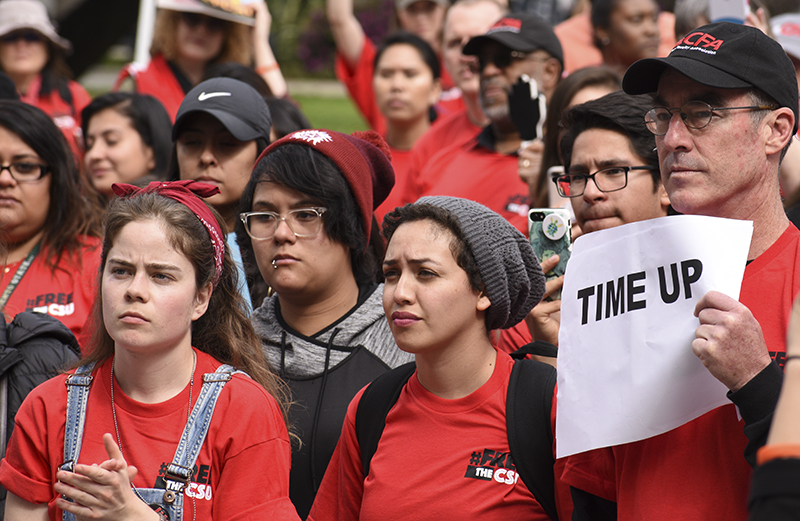 Protestors listen to guest speakers and express concerns over the lack of CSU funding.

Protest chants echoed against the state capitol building Wednesday as students from across California came together to ask state legislators to fully fund the CSU system.

The protest was organized by the faculty union group California Faculty Association (CFA) and a student intern group called Students for Quality Education (SQE). CFA and SQE chapters from every CSU campus paid for buses to transport any CSU student to and from Sacramento. Attendees yelled rally cries and chants to bring attention to the lack of state funding for the CSU system.

Each year, the CSU Board of Trustees requests an increase in funding for the CSU system so that all 23 campuses can be fully funded and meet rising expenses.

In November, the CSU Board of Trustees requested an additional $282.9 million to support mandatory costs such as Graduation Initiative 2025, infrastructure needs and expenses for increased student enrollment.

In May, Governor Brown will finalize the 2018-19 state budget. If the proposed $92.1 million additional state funding for the CSU system isn’t adjusted, CSU students will face tuition increases to cover the 190.8 million unfunded dollars.

@theorion_news Students chanting in Sacramento over tuition hikes. “When education is under attack, what do we do?” “Stand up fight back!” pic.twitter.com/lA3l7iiuyJ

According to Alice Sunshine, a CFA communications member who helped organize the event, roughly 1,000 people attended the protest including students, faculty members and Sacramento locals. Sunshine and other CFA volunteers helped sign people into the event. Each attendee was given a bright red t-shirt that said #FreeTheCSU on the front side and #FundTheDream on the back side. A free meal ticket was also provided to be used at one of two food trucks. Participants gathered on one side of the state capital building around 10:30 a.m. to watch various guest speakers and student groups present their opinions on the lack of state funding.

Josh CozineRamon Jimenez leads a juggling event to serve as a metaphor for college students that juggle life expenses.

Fresno State student Ramon Jimenez led a juggling activity that served as a metaphor for students having to juggle multiple responsibilities and bills.

Jimenez said that it’s tough for students to juggle between eating costs, rent and school expenses. “It’s not that easy, a lot of (students) will drop the ball at some time,” he said.

Several students also gave speeches and performed spoken word poetry pieces, some of which were accompanied by interpretive dances.

CSU Chancellor Timothy White also attended the protest and voiced his support for the CFA’s protest. However, White failed to mention any support for SQE which prompted students to shout out during White’s speech.

CSU Chancellor Timothy White speaks briefly on his support of the protest and #CFA. Students shouted at White when he said he supported CFA but didn’t mention anything about #SQE pic.twitter.com/4YiBiBdBcT

“What about SQE?” student protestors asked before yelling, “Take a pay cut.”

Near the speaking area, students created an art display that was another representation of how another tuition increase would affect students. Prior to traveling to Sacramento, Chico State students created “debt boulders” to add to this artistic metaphor. Other CSU students also added their own boulders so that the final collection would show a physical ‘mountain’ of debt. 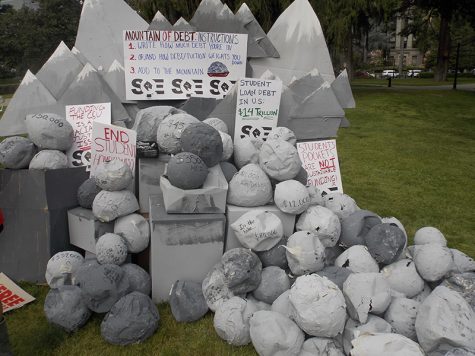 Josh CozineSeveral CSU students who are currently in debt added their boulders to this display. These students also included the amount of debt they currently have and how this debt weighs them down.

Booths were also set up for protestors to fill out rally signs and letters for Governor Brown. At 12:30 p.m. CFA Legislative Director Mario Guerrero led nine students into the capitol building to deliver letters to the governor.

@theorion_news A small delegation, including editors from The Orion, present signs and messages from CSU students to Gabriela Montano Assistant Director of External Affairs to the governors office pic.twitter.com/bqp7OEn7yE

Guerrero ended up entering the office alone and agreed upon a compromise with state officials. Instead of letting students in the governor’s office, Assistant Deputy Director of External Affairs Gabriela Montano came outside to meet the students briefly.

Guerrero expressed his disappointment in the last minute change of plans by the governor’s office as he said that this wasn’t the original plan.

“The delegation was set-up beforehand,” Guerrero said. “I just received an email (changing these plans) at about noon.”

While the delivery of the protest letters was changed, Governor Brown still received poster-sized letters from dozens of CSU students including Chico State Associated Student President Alisha Sharma. The governor didn’t attend the protest so students will have to wait for a public response or until the May revision of the state budget is released. 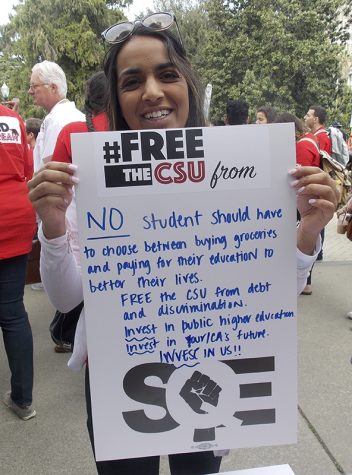 Alex Grant and Josh Cozine can be reached at [email protected] or @theorion_news on Twitter.