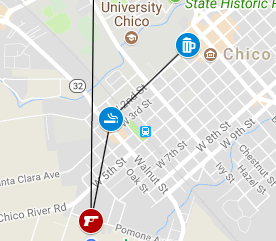 A woman was shot early Saturday morning while in the back of a Lyft outside of townhouses on 500 block of Pomona Ave in Chico.

According to the Lyft driver, Robert Archer, “It was your typical weekend Chico call until (the shot).”

He said he picked up a male and female couple, whose names he could not recall, from Madison Bear Garden. After a brief stop at Ray’s Liquor for cigarettes, they asked to go to Pomona Avenue to a townhouse where a friend of the males lived.

“They were talking about if they wanted to go inside,” Archer said, “when I heard a loud crack. At first, I thought I hit something or someone hit me.”

Then, he said, he realized what had happened.

Archer said the female said, “I can’t move, it hurts,” and she pulled her hand from her back and it was covered in blood.

“I saw a small white spot on the seat and realized it was a hole, and she’s been shot,” Archer said. He then immediately drove the couple to Enloe Hospital.

According to Archer, there was only one shot that he heard, and it went through the trunk and backseat of his vehicle. He said he didn’t see anyone, but the male passenger said someone went running from behind the car shortly after the shot.

Commander Billy Albridge, Chico Police, said they do not have any suspects as of now, and is asking, “any witnesses in the area to call-in” if they heard anything related to the incident. Chico Police can reached at 897-4900.

Commander Albridge would not release further information as the incident is still under investigation, but said that the victim had underwent surgery and is in stable condition as of Monday afternoon.