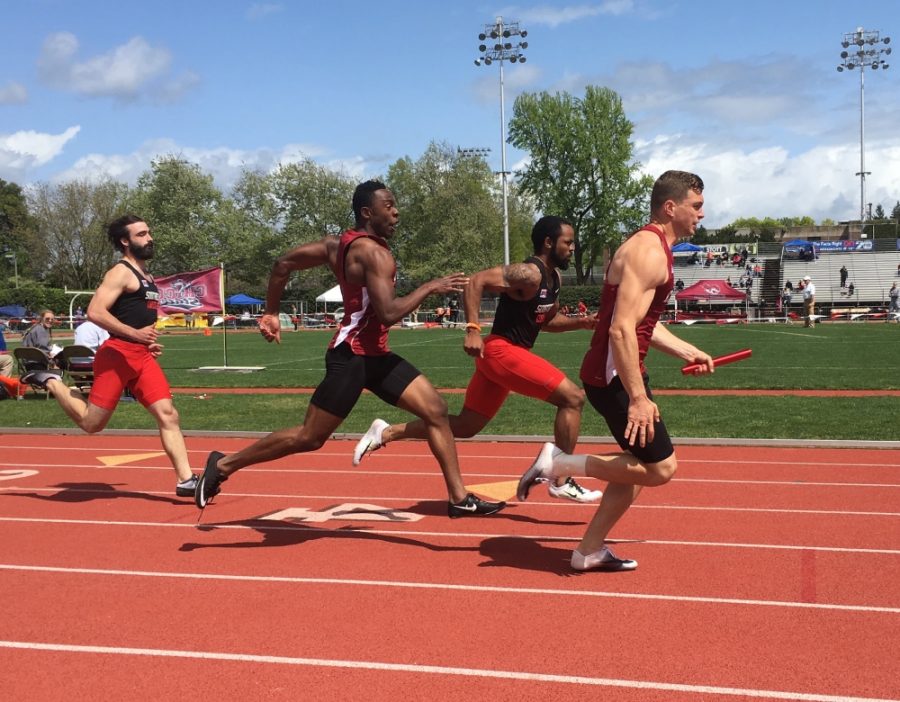 Chico State's Derrick Shepherd and Windsor Jamison complete the transfer of the baton in the 4x100 relay on Saturday. The team finished third with a time of 42.75 seconds. Photo credit: Andrew Baumgartner

In the final home track meet of the year, Chico State’s track and field teams saw plenty of first place finishes at The Chico Distance Carnival and Twilight Invitational.

One of those first-place finishers was Hasani Barrett in the 4×400 meter relay.

Barrett is one Wildcat who likes to compete at home.

“I always like competing at home because I’m so familiar with my home track,” Barrett said. “It kind of gives me a confidence boost.”

“It doesn’t get any better than running on your home track with Chico across my chest and a Wildcat on my back,” Holt said.

Holt finished second in the women’s 100 and 200 meter dash, with a personal best in the 100 meter at 11.92 seconds which was .02 seconds behind the first place finisher.

Holt was hyped about her finish. On Sunday, Holt said, “Yesterday was great. I ran great! It was amazing! That run freaking made nationals! Dang near Olympics!”

Leading the way for the Chico State men, yet again, was Tyler Arroyo who finished first in the high jump for the sixth track meet in a row. It has become noticeable a group of top-level athletes in the high jump event and Arroyo led the way once again.

Chico State’s track and field next travels to Turlock on April 12 and 13 when they will compete in the Stanislaus Multi.