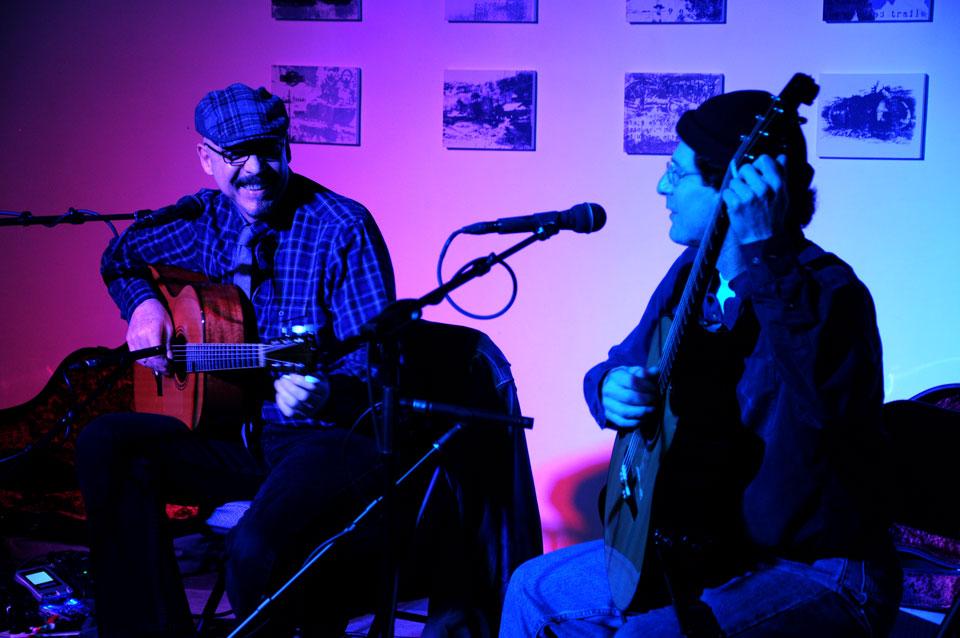 Peter Janson warms up the crowd to their next song by explaining that the only person he could ever play well with is Larry Pattis, musically and in real life.Photo credit: Annie Paige

Peter Janson pulled out his iPhone and took snapshots of the audience before he strummed a note on his acoustic guitar. He waved to an audience of about 35 and it exuberantly waved back.

Larry Pattis, sitting to the right of Janson, smiled, leaned into his microphone and said, “A thought just came to me, anybody on witness protection here?”

Pattis not only demonstrated his superb technique in folk and classical acoustic music, but also managed to convey the emotional undertone of each piece he performed.

Watching him play his guitar was like watching someone speak privately to an old friend, as Pattis leaned into his instrument, eyes closed, slightly smiling at moments in each song.

Pattis played a memorable song called “Nonpareil,” which reflects on good
times spent with his younger sister who always ate nonpareils at the
movies and was diagnosed with bipolar disorder later in life.

Another
thoughtful piece Pattis composed and performed was called “Hands of Time,” which was inspired by a
friend who was diagnosed with pancreatic cancer.

Janson, a master of traditional, Celtic, folk and classical guitar music, has a deep, rich singing voice that was perfectly suited for telling traditional folk tales through song.

His arrangements reflected his expertise and passion for the musical style and tales of traditional English, Irish and Scottish songs. Multiple pieces Janson performed, such as a medley of “Hey Jenny Come Down to Jock” and “Shepherd’s Delight,” left the gallery so still that anyone who drew in a deep breath could have been criticized for being noisy.

Janson’s musical taste and abilities also include contemporary music. He played an arrangement of “Patient Love” by Mike Rosenberg, also known as Passenger.

Janson then told the audience that, though it is often said, it isn’t true that music isn’t as good now as it was in the past.

Janson and Pattis played the last song of the night together, giving the audience a treat that they had eagerly awaited. The guitarists played “Farewell to Tarwathie,” a Scottish song from the early 1800s that tells of whalers leaving home to spend a year at sea.

Janson and Pattis performed meticulously and passionately, with no note out of place. The two artists’ different styles complemented one another in an intricate arrangement. It was a shame that it was their last number of the night.

At the show’s end, Janson and Pattis received a lengthy round of applause and cheers. They smiled gratefully at the audience.

Even though their performance was the first of eleven consecutive shows on the American Guitar Masters tour, both stayed afterward to speak with excited audience members.

Lisa Sorensen was just one of many audience members that was impressed by the technique and performance of the two acoustic guitarists.

“I think their music is amazing,” Sorensen said. “It’s amazing to me the
amount of sound and harmony they can get out of six strings.”

Information about Peter Janson, Larry Pattis and tour dates for the American Guitar Masters Concert series can be found at www.peterjanson.com, www.larrypattis.com and www.americanguitarmasters.com.