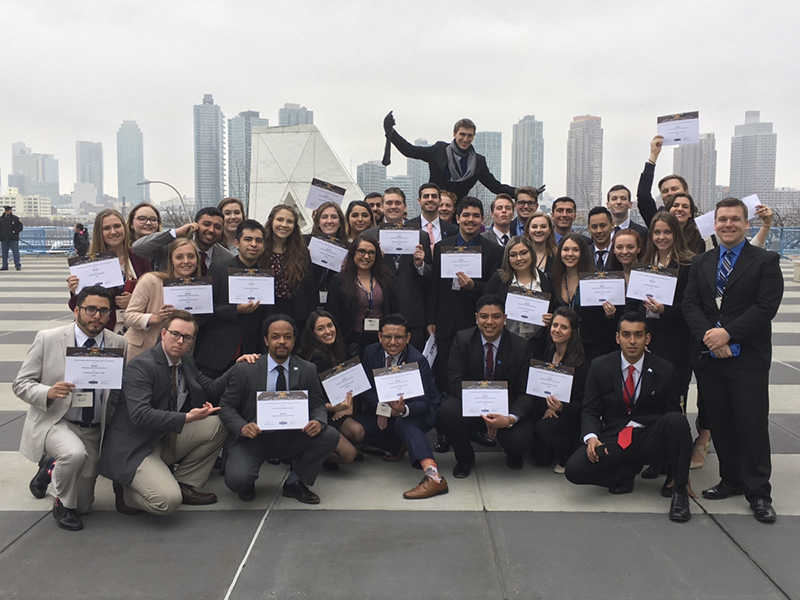 This marked the ninth time in 11 years Chico State won this award which is given to the top 10 percent of schools competing. The Chico State team of 36 members also won three outstanding delegate in committee awards and 13 out of 18 individual position paper awards, which topped all schools.

Position papers are a comprehensive break down that defends the country’s policies and includes proposals for resolution.

Due to high demand of colleges wanting to compete, the conference is split into two weeks; March 18 -22 and March 25-29. Over 200 schools attending each week.

The two conferences are the world’s largest university-level simulations of the United Nations. More than 5,000 students attended the conferences, half of which came from outside the U.S.

The awards are based on writing skills, knowledge of participants’ chosen countries and the ability to discuss, negotiate and present on global issues. This year, the Chico State team chose to represent the country of Brazil. Chico State students served on 16 committees that ranged from migration to women’s rights. Each team acted according to their country’s policies and beliefs.

Political science lecturer John Crosby is Chico State’s program adviser but credits all the students for the awards.

“For the position papers, those are the students, it’s their work. They are the ones that correct themselves, they have student officers that go through the papers and talk to them,” Crosby said. “I don’t grade the position papers. I don’t look at them.”

Crosby believes the opportunity to gain insight into the inner workings of the world will greatly benefit students.

“For us to understand how the world works we have to understand what drives nations. If we can understand those reasons we can become global citizens,” he said.

Every year a new officer panel is elected that consists of students who competed in prior years.

David Ramirez, an international relations major, spent the last two semesters as a delegate and will return next year as a student officer. Ramirez said that the experience of competing against thousands of international students was extremely educational.

“The New York experience was priceless, everything from the preparation to being in the conference and competing with some of the best students in the world,” Ramirez said. “It teaches you how to work with individuals with different mindsets, expands your vocabulary and develops your social skills in a professional setting.”

Students must enroll in Crosby’s political science course Model United Nations (POLS 340A) in the fall and once again in the spring to participate in the New York conference. The fall semester includes a conference in which delegates travel to Seattle.

Although mostly political science majors join the team, Crosby encourages any interested student to sign up for the class as the skills learned will prepare any students for future careers.

“These skills are not political science-related skills. These are skills useful for any future job. How to talk to somebody, how to persuade someone that your position is right. There are companies out there in the future that you won’t agree with their policies, but unfortunately you will have to pretend to agree to stay employed,” Crosby said. “The skill set is relevant across any discipline. In any kind of job scenario, the people that have done their research, know how to write, know to present themselves and (those) that can advance their agenda will be the ones that win.”