Top 5 moments in the first week of NBA playoffs 2018

After the excitement of March Madness, NBA fans are ready for playoffs and finals on the professional level.

The NBA Playoffs have 16 total teams, with the top eight teams from each conference participating. Teams in each conference are seeded from one to eight based on their record. The teams with the best record in their conferences will be the overall No. 1 seeds, second best record will be No. 2 seeds and so on.

The NBA playoffs began on April 14. 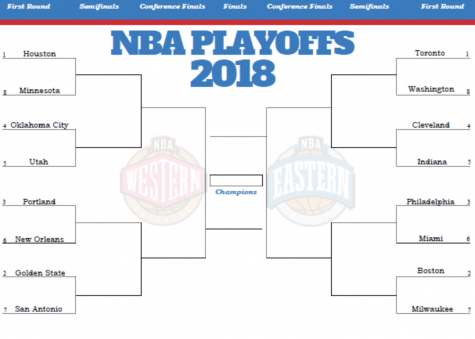 Top 5 Moments of the First Round of NBA playoffs:

1. Indiana Pacers are giving the Cleveland Cavaliers a run for their money.

No. 4 seed Cavaliers had a tough time defending their spot against the No. 5 seed Pacers during the first and third games of the round. Bouncing back after a huge loss in game one, LeBron James scored 46 points out of 100 in game two. Typical LeBron moment, leading the team when they need it most.

The No. 3 seed Trail Blazers are out of the running for the 2018 NBA Championship thanks to the No. 6 seed Pelicans. The Pelicans finished out the first round of playoffs with a 4-0 record, the first of their conference to do so this year. The Pelicans also became the first No. 6 seed (or lower) to sweep its first round series since the NBA switched from its best-of-five format in 2003.

The No. 1 seed Toronto Raptors were easily one of the best teams during the regular season and proved that point to the No. 8 seed Washington Wizards during the first two games in the round. The Wizards showed the Raptors that they would not go down with a fight when they won 122-103 in game three, surprising sports analysts and fans alike. This just proves that Wizards point guard John Wall and shooting guard Bradley Beal can easily be the best players on the court. Watch out Raptors!

Although the No. 7 seed Milwaukee Bucks lost to the No. 2 seed Boston Celtics in games one and two, that did not stop the Bucks from putting in their all and winning game three. Finally getting some contributions from the bench, players like Thon Maker and Jabari Parker went off on the court. The Bucks whooped the Celtics in a shocking win of 116-92.

The No. 2 seed Warriors have a 3-1 lead against No. 7 seed San Antonio Spurs and are looking to close up shop in game five. The Spurs have been missing head coach Greg Popovich in game four and will again in game. With many players dealing with injuries, the Warriors will have to work hard for their next win against the Spurs.

Stay tuned to see how the playoffs turn out and what team will be the next NBA Champions.

Courtney Chapman can be reached at [email protected] or @courtneychaps on Twitter.