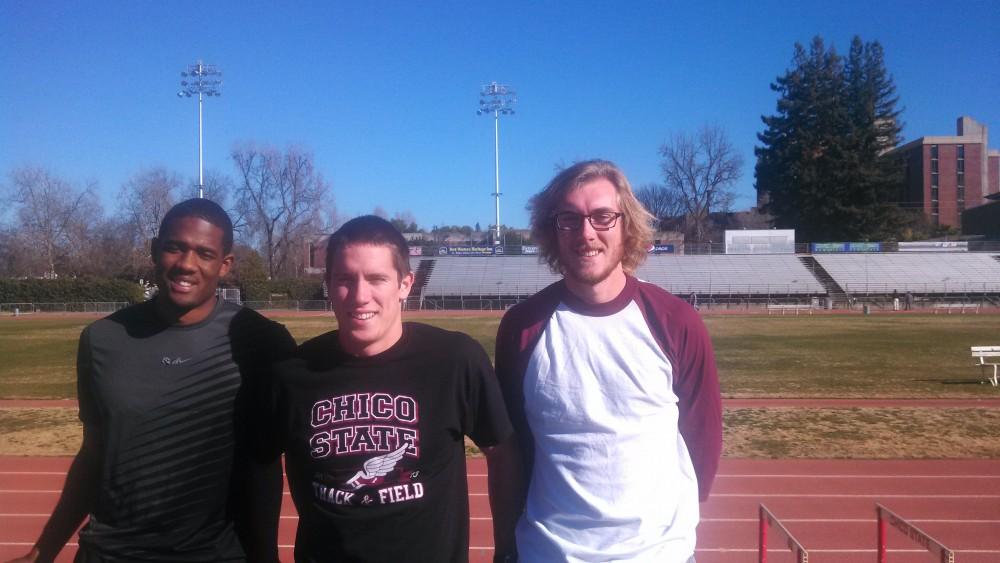 Lee Masten
After a decade of dominance in the CCAA conference, the
Chico State track team makes it look easy.
Chico has nothing to fear as some of the best talent in the CCAA and in the nation are returning for the 2014 season. For the
Wildcats, three returning athletes in particular give the competition nightmares.

Seniors John Brunk and J Patrick Smith and junior Hakeem Dyson will be coming back for the 2014 season in hopes of bettering themselves and the team. These three student athletes know what it takes to win at the highest of levels.

Dyson, who holds the school record in the 110-meter hurdles, said the hard work pays off.

“It definitely is a lot of fun seeing all the hard work paired with the camaraderie pay off, especially during the end of the season,” Dyson said. “You work so hard and give it everything you’ve got and then to get championships and to see all your teammates get better is really special.”

Dyson returns to the Wildcats as arguably the best hurdler in school history. He said he believes that the school record he holds is important, but it is more important to come together as a team.

“Breaking the record is definitely something I would like to do, but I just see it as another personal record and getting to nationals is a high priority as well,” Dyson said.

He said he also relies heavily on the hurdles coach, Steve Irving, who helps motivate him and train him to be prepared for the meets.

Head coach Oliver Hanf said he likes to put some of the top talent the staff recruits into the decathlon event. Luckily, two of their top returners, Brunk and Smith, are among the best.

“Last season was tough for me,” said Brunk, who redshirted in 2013. “It was hard watching everyone do so well and not be able to be out there and get another title with them.”

Brunk has had great success in the decathlon. He was an All-American in 2012 and is one of the better 400-meter dash participants in the CCAA. He said he will return in 2014 with a chip on his shoulder, looking to propel himself back to the top.

Smith also returns not only as the team’s top decathlete, but as the defending NCAA Division II decathlete champion.

“The pressure is there, but you’re not really thinking about it until the end of the season when nationals come around,” Smith said. “The biggest challenge is being competitive with all the other guys on the team.”

Smith and Brunk will be teammates, but in reality they must compete against each other in order to boost their status and numbers. However, the competition doesn’t seem to bother their relationship.

“It’s a friendly competition 99 percent of the time,” Brunk said. “But when it comes time for the event, you’re looking to be the best one out there.”

Two other returning athletes who will help the team’s chances for a CCAA championship are Michael Souza and Isaac Chavez. Souza, who also redshirted last year, will be looking to repeat his 2012 season in which he was the CCAA champion in high jump and even qualified for the nationals. Chavez is a four-time All-American for the cross country team. He also holds the same honors for the past two years in the 10k for the track team.

Regardless of whether the Wildcats earn an 11th consecutive CCAA championship, the legacy this team has built over the past decade will be always be part of school history. The entire team will be under pressure, but these returning athletes will do their part to lead the way and eventually pass the torch to the younger athletes.

Lee Masten can be reached at [email protected] or @lee23masten on Twitter.