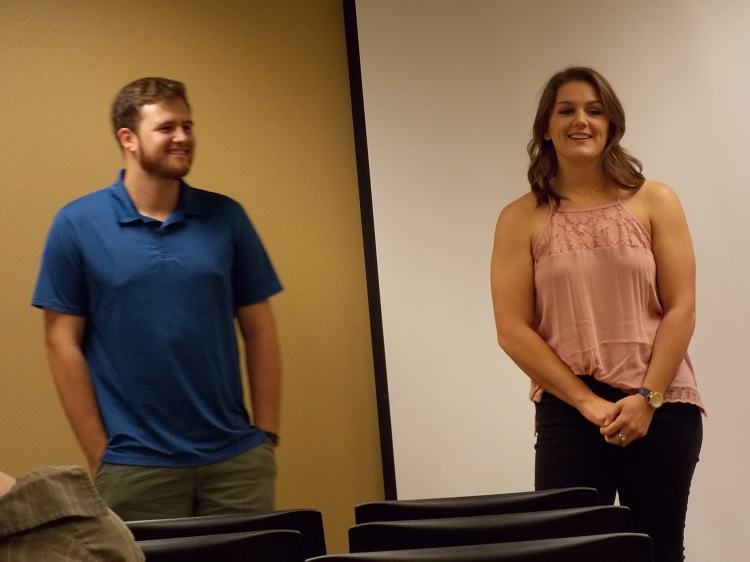 Films from students of Visual Anthropology at Chico State presented films on the second story of Bell Memorial Union. Harrison Hunter (left) directed a film about deaf culture and cochlear implants. Julia Bellon (right) made a film highlighting some of the historical problems of Greek life and culture on college campuses. Photo credit: Josh Cozine

The opioid epidemic, gun violence and gun control, and sexual assault on campus were just a few of the topics covered by student presenters Wednesday at the 17th annual Student Research Symposium.

Held in Bell Memorial Union’s auditorium on the second floor, the symposium started around 5:30 p.m. with crowds estimated at over 500 people, 389 of which were also registered as presenters. It touched on seemingly every pressing issue of the day. 118 poster and table presentations took place in the auditorium, while the second floor was open for larger discussion and presentation groups, as well as films from students in the campus’s Visual Anthropology class.

Dean of the College of Behavioral and Social Sciences Eddie Vela said this year’s symposium was the largest one yet, “It’s incredibly invigorating to see students doing this kind of real-world research,” he said.

Hot-button issues like gun control and gun ownership and campus crime and sexual assault had multiple tables, but there was still room for some lighter issues, like déjà vu, and how well people multi-task.

“It turns out not too well,” said Daniel Eskandari, who was tabling on his research on the topic.

Dean Vela wrapped up the event formally at 7:00 p.m., but also signaled for food to be brought out and invited everyone to stay and socialize for another half hour.