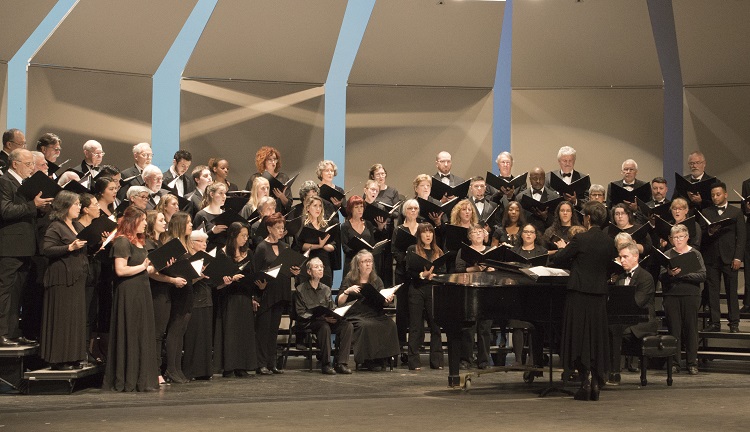 The theatre reverberated with choral song Saturday evening, to a nearly full audience for Chico State’s Music and Theatre Department’s presentation of “A Garland of Song.”

The concert started at 7:30 p.m. and ended around 9:30 p.m. in PAC 144, and progressed through three different ensembles: the University Chorus, the Chamber Singers, and the A Capella Choir.

Songs reflected the garland theme, with flowers being mentioned in nearly every title or song. Director David Scholz said he initially chose the theme thinking he would have lots of room to work with.

“Turns out,” he said to laughs from the audience, ”all songs with flowers are roses, but I managed to find a few that weren’t.”

Performances began with the University Chorus, a group of choir singers of all ages from the local area, conducted by Daun Weiss.

The group performed several songs, including one piece made up of three Oscar Wilde poems before ending on a quicker upbeat song, “Joy is in the Meadows.”

A smaller group, the Chamber Singers, then formed a semi-circle front stage and closer to the audience for a more intimate feel.

The song choices showed off the vocal power of the smaller ensemble. Their 20 or so voices resonated throughout the theatre, filling the space with a rich, voluminous sound expected of a full choir

The last group to perform for the night was Chico State’s A Cappella Choir. The choir sang a wide-arrangement of pieces. Slower pieces allowed for upswells showing the groups impressive dynamic range. Other pieces included fun back-and-forths between the higher and lower pitched male and female voices, and the group even managed a jazz-style arrangement of some Shakespeare sonnets.

Before the final song, Director Scholz brought forward graduating choir members and reminisced with each of their time with the choir. Many had been a part of the choir throughout their entire college experience.

Scholz said he was extremely happy with the performance of all the groups after the show, “I always talk about singing more emotive for an audience, but you can’t really practice that, and they sang with lots of passion and excitement tonight,” he said, “I am very pleased.”