Bike theft continues to be a problem at Chico State 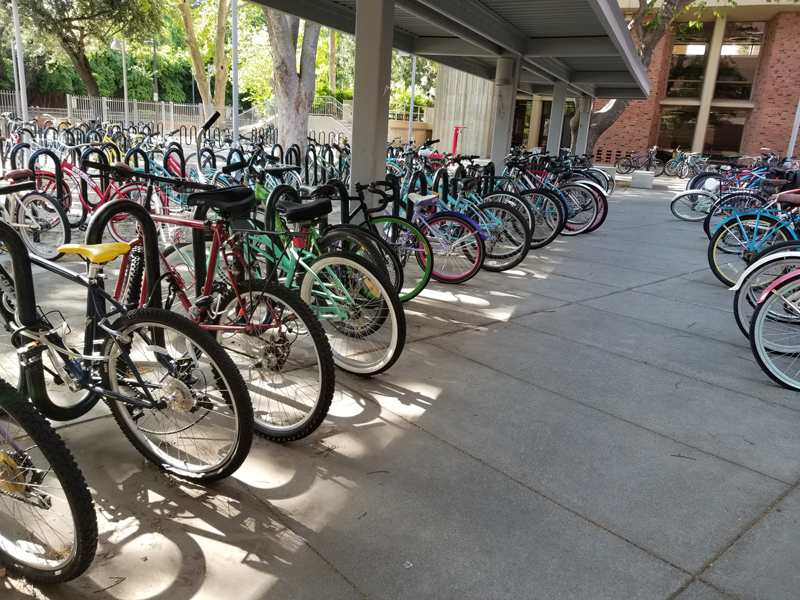 Whitney Hall is a common place for students to lock their bikes because of the number of students living in the dorms on campus.

Walking to class and seeing bikes tires and seats is a common occurrence for Chico State students.

“(Bikes and parts are) easily disposed of,” said University Police Chief John Reid. “They’re sold kind of on the black market for pennies on the dollar and so they transfer ownership pretty quickly.”

During the 2017 fall semester, 54 bikes were reported stolen to University Police and so far this semester, 10 bikes have been reported stolen, according to an email from Shelley Keener, UPD’s records and property analyst.

As shown in the map below, one of the most common places that bikes are taken from are the bike racks next to Whitney Hall.

“Whitney Hall is a big location for us, as well as the bike racks by Siskiyou,” Chief Reid said.

According to Chief Reid, the high concentration of bikes from students living in Sutter and Whitney Hall is likely the reason for the large number of bikes being stolen from the area.

“A lot of it has to do with new students on campus who live on campus, incoming freshman, younger students bringing a bike to campus, maybe even putting it on a bike rack without a bike lock,” Chief Reid said. “It’s almost like a process we go through in the fall, we know it’s coming, we start increasing our patrol and making some arrests. Then the problem starts to drop off. November and December we see very few incidents. Even in the spring semester, it starts to drop off.”

The report stated that one of the possible reasons for this rise in bike thefts is that the Prison Realignment program, that sentenced low-level offenders to county jails rather than state prisons, has increased the number of these offenders. Low-level offenders typically are arrested for property crimes, like bike theft.

According to the report, Chico Police analyzed 106 of the bike thefts and found that 74 were locked and 32 weren’t locked. Of the locked bikes, 48 were secured with a cable lock and only nine with a U-Lock.

With bike theft being such a prominent issue at Chico State, ideas on how to deter bike theft have been considered. According to Chief Reid, education and the bike owner taking responsibility for their property are the most important factors in avoiding bike theft.

“We would say first and foremost that the bike owner really has to take responsibility for ensuring that it’s secure,” Chief Reid said. “The biggest thing from our standpoint is just continuing to educate people, (showing them that) this is the way you have to lock your bike up.”

Bikes with the front wheel, frame and back wheel secured are less likely to be stolen and bikes that are registered are more likely to be returned to the owner if stolen, according to Chief Reid.

“So there’s two things,” he said. “(If you) register your bike, lock it properly, you’re probably going to be OK.”

Ruby Larson can be reached at [email protected] or @ruby_L202 on Twitter.