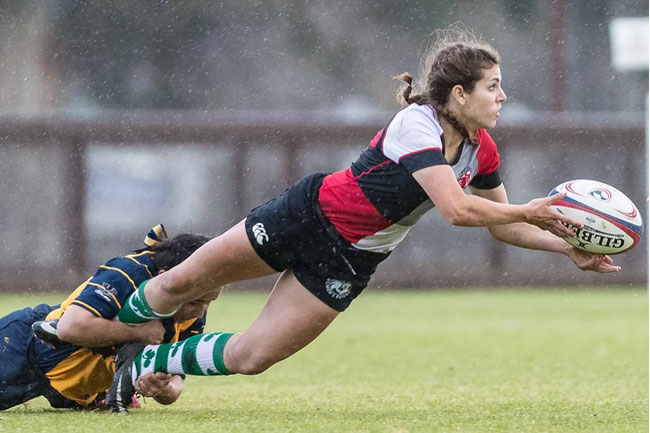 Leader and team captain of the No. 1 women’s rugby team in the nation Darby McFall was named Pacific Mountain Rugby Conference Most Outstanding Player of the Year.

McFall, a senior, has been a part of Chico State’s rugby club all four years that she has been at Chico State and has been played a major role in the team’s success this season.

When asked about where winning the award ranks, McFall said, “I have been playing for four years and I try to work super hard, and so I think it’s definitely one of my best (seasons), if not the best college achievement I’ve had.”

McFall has been the primary scorer while playing fullback for the team and her stats speak for themselves. McFall finished the year with 21 tries, 44 conversion kicks and four penalty kicks. She totalled 205 points on the season.

“This year I kind of changed my mindset. I knew that I had a pretty good season last year and I kind of knew what I needed to do to elevate my game, and that was just doing a little extra,” McFall said. “I picked up extra workouts. I made special time just to set aside to do rugby stuff as opposed to years past where I’ve just kind of incorporated rugby into my life. Now I really set aside time to watch rugby.”

The coaching staff and hard work on and off the field are the reasons why McFall’s game has elevated to this level.

“The coaches are everything,” McFall said. “Mary and Alex are there every single day. I think that after playing under them for four years, I kind of understand and clicked everything that they had been telling me in previous years.”

McFall got into rugby with the encouragement of her sister, who also played on the rugby club at Chico State.

“She played before me and if she didn’t play, then I probably would have never played,” McFall said. “I really owe it all to her.”

Playing as fullback puts a lot of pressure on McFall, but the senior welcomes the pressure and responsibility the position takes on.

McFall has had a successful career here at Chico State and hopes to leave a legacy filled with hard work.