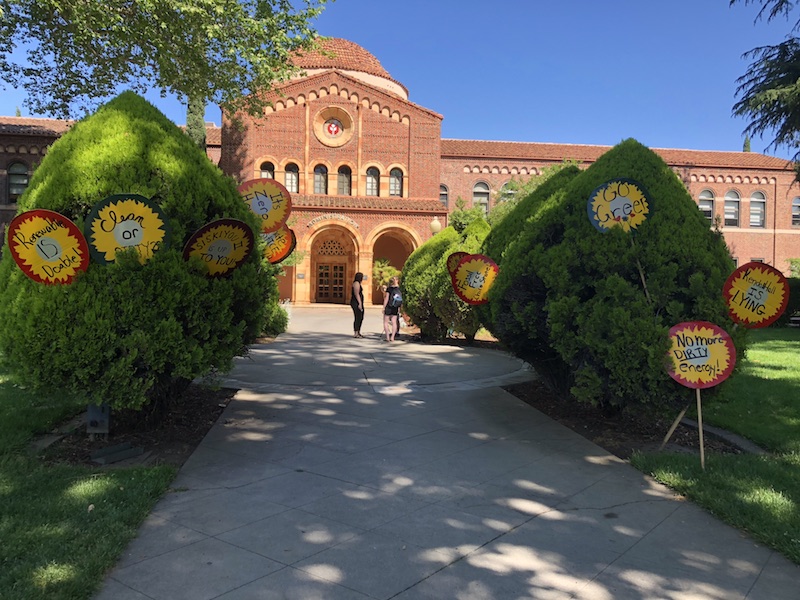 Students in Mark Stemen's class and from Fossil Free Chico State placed signs protesting the campus's efforts for clean energy outside Kendall Hall. The signs were displayed during a May 7 protest of President Hutchinson's decision to stagger fee increases over the next three semesters. Photo credit: Natalie Hanson

A plan for addressing climate change on campus has been confirmed by the university, but students recently voiced concern about its details.

According to Director of Facilities and Management Services Michael Guzzi, this “master plan” was announced in April as part of an agreement made by the university in 2007 to reach climate neutrality by 2030.

This plan is seen by some students as a response to the controversy surrounding “Siskiyou II,” the new building project this semester.

The project became controversial after a group of students campaigned against its planned use of natural gases and successfully passed an advisory measure in the Associated Students ballot. This advisory measure called for a reaffirmation of the university’s 2007 Climate Neutrality commitment and passed with yes votes from over 86% of voters.

According to the Fossil Free Chico State Professor Mark Stemen, this vote reflects a desire for change as students who helped get it on the ballot expressed an uncertainty for the future.

A Task Force for the Future

A.S. Commissioner of Sustainability Affairs Maggie Scarpa stated that she felt pessimistic about the future, due to what she sees as a lack of planning for a campus climate “task force.”

According to Scarpa, this task force was previously discussed as a solution to help address needs for sustainability efforts on campus and to plan all future growth on campus with sustainability in mind. Because no such task force has been planned by the university, Scarpa said she felt that the university needs to seriously consider picking such a team to address the climate neutrality commitment.

A.S. Vice President Jared Geiser also expressed his concern that the campus still has little planned for future efforts. “I think it’s really irresponsible of the university,” he said.

Although not directly involved with the efforts for the advisory measure, Geiser said sustainability is what pushed him into student government. Geiser also added that the need for student efforts reflects shortcomings of the university.

“Students have a lot on their plates and it’s really sad that we still had to hold (the university) accountable,” Geiser said. “They should have been doing this on their own. I’m glad they decided to make (Siskiyou II) more sustainable, but I wish they had done that in the first place…every building should have been done this way.”

Is Sustainability a Priority?

Stemen also expressed concerns about Chico State’s sustainability practices, despite the success of the advisory measure.

He said he was “pleasantly surprised” by the final design of Siskiyou II.

“I want to admit, the new number is really good,” he said, referring to the new estimate for the building’s emissions. He said he is also glad that the building will not be connected to the boiler-chiller plant, and that no vivarium will be built as originally proposed.

However, Stemen also said when it comes to the new “master plan” for addressing climate change, there is a lot left uncertain. Prior to this year, six new building projects were constructed, all of which are actively producing fossil fuels.

“They waited until 2018 to finally plan for 2030,” he said. “In the meantime, they went ahead and built six new capital projects. They tried to make them green or whatever, but there was no realization of what it was going to do for climate neutrality.”

According to Stemen, in 2015 the boiler-chiller plant, which provides cooling and heating to the campus, was expanded and remodified.

This, he said, seems to indicate a lack of motivation to detach from such a plant that produces high levels of greenhouse gases.

Although changes have been made to the new building thanks in part to student activism, Stemen said he felt that the plan for campus sustainability seems incomplete if no task force is planned.

Putting Together a Master Plan

Guzzi said that he is currently involved with the new master plan for the campus. He said that he had no knowledge of a proposed climate task force, but that the campus has achieved the highest grade for a STARS report in the CSU, and has kicked off the plan to determine the future growth of the campus.

“It’s a physical response to a strategic vision of the campus,” Guzzi said.

He also said heavy negotiation took place with the campus contractor to dedicate “a large portion” to sustainability.

“The contractors kicked off this plan in April,” Guzzi said. “Basically they’re going to start meeting with our constituents, looking at the progress we’ve made and what we need to do to move forward.”

Sustainability “was a huge add” to the plan, he added. When Guzzi came to Chico State in 2017, he saw a need for more focus on the plan. He mentioned that in the new planning for the Siskiyou II project, significant progress was made in respects to final emissions estimates.

In response to student concerns for the future of the Institute for Sustainable Development, Guzzi said that he had no knowledge of internal changes. He also stated that ISD and its employees, including Fletcher Alexander, have been very important in the efforts to put together a master plan for the university.

“The partnership that we have right now…we’re trying to include them in every discussion that we have because everything we do needs to have a sustainable portion in it,” Guzzi said.

He also said that he did not appreciate the wording of the advisory measure passed by Fossil Free Chico State.

“The thing that scared me about it is that it implied that we weren’t doing anything,” Guzzi said. “I can tell you, we work tirelessly as a team and we aren’t sitting back here trying to burn down the world or something. We want to do something.”

Guzzi said there will soon be a new way students can interact with the master plan – an interactive map on the Chico State website.

According to Guzzi, this interactive map will allow students to view the campus map, place pins on different areas of the campus and make comments about what they like or don’t like about these areas. This map is intended to start more discussions about the campus’ safety and to inform the administration about possible changes needed. Guzzi added that he will use it as a reference for campus improvements.

The proposed map tool is now available for students to preview, according to University Communications Public Affairs Specialist Sean Murphy.

Although Micheal Guzzi said students will be a part of the process, other parts of the master plan have not yet been made public to students.

“Students should look out for more opportunities to be part of it,” he said. “We will have open forums to get their input to help solve this problem, ’cause it’s a big problem and we’re going to need help from everyone to work to solve it.”