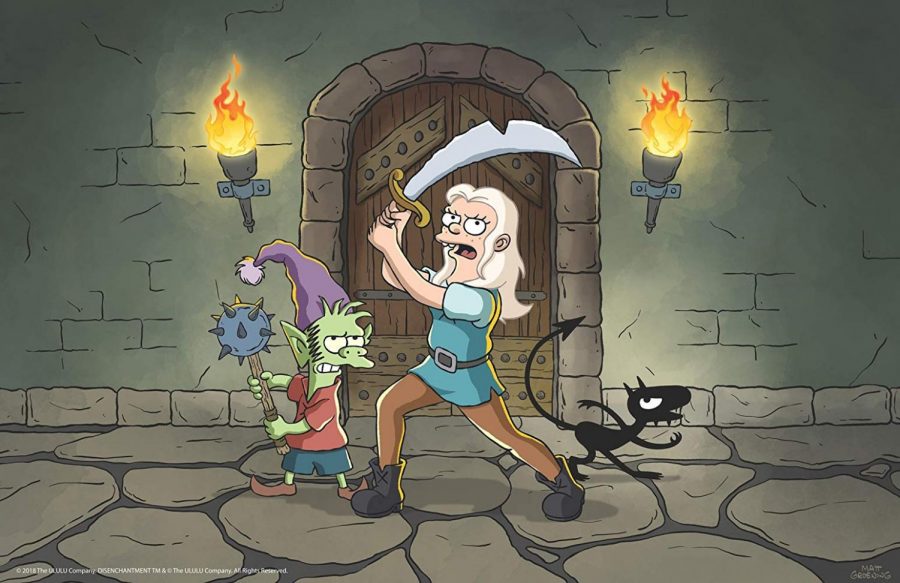 Matt Groening is back with a new show called “Disenchantment,” an animated comedy set in a fantasy world. Although it has the distinct style that Groening’s shows are known for, it lacks the charm and humor that “The Simpsons” and “Futurama” had.

The show’s main trio is made up of Bean, a princess that rejects her royal life, a demon named Luci and an elf named Elfo. Eric Andre’s performance as Luci is the highlight of the main cast. Most of the jokes that hit their mark come from Andre’s delivery of mean-spirited lines. Overall, the voice acting is solid and fans of Groening’s other shows will recognize a lot of the voices. Unfortunately, neither of those facts make the show any funnier.

“Disenchantment” isn’t a bad show, but it suffers from the fact that most of its jokes don’t hit their mark, enough. The visuals and story are enough but to keep someone watching through all ten episodes, I found myself thinking “oh that was clever” instead of actually laughing at most of the attempted humor. There are a lot of visual gags that are good for a chuckle here and there, but the dialogue isn’t strong enough to keep an episode funny from beginning to end.

At times the show is too focused on its plot, to bother with humor. The entire season is supposed to follow a continuous story that involves Bean trying to break free from her upbringing and Elfo being used to create an elixir of immortality. These story beats don’t pay off until the last couple of episodes and they constantly interrupt the lighthearted moments of the show. Just when things start getting fun, the story rears its head.

One good thing about the show is that the fantasy setting is well realized. The royal kingdom of Dreamland is the centerpiece of the show and it’s a good, satirical twist on the standard fantasy setting. Similar to “Futurama”, this show takes a lot of fantasy tropes and pokes fun at them. The problem is that some of these jokes have already been done, even in Groening’s past shows.

It’s hard to watch this show and not instinctively compare it to “The Simpsons” or “Futurama” and it’s that same pedigree that will attract most of “Disenchantment’s” viewers. In a vacuum, this show is fine, but compared to those greats it doesn’t stack up in any department besides the voice acting. The shell is there: good animation, interesting setting, and character variety. It just lacks heart in its writing. There are glimpses of a great show here, but it doesn’t last long.

There are worse things to watch on Netflix. “Disenchantment” is a decent show at best and decent background noise at worst. It’s not good enough for Matt Groening’s legacy, but it is good enough for three stars.