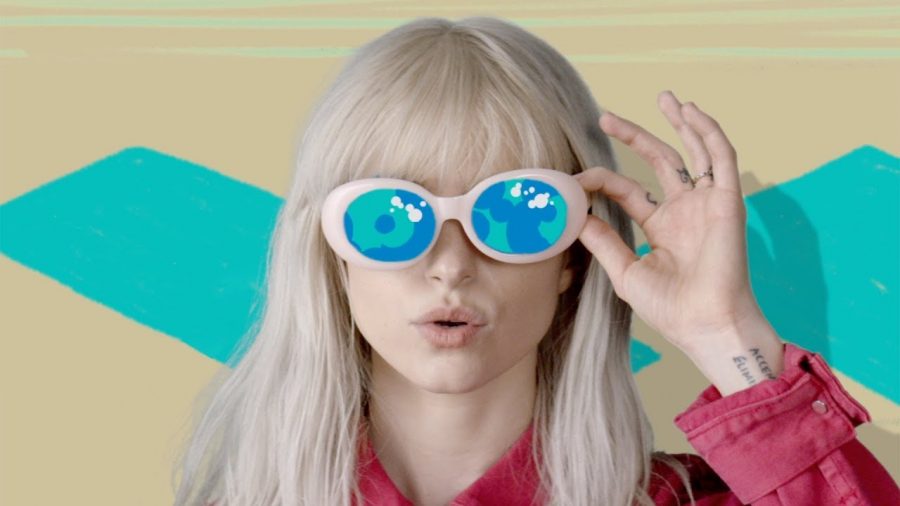 Hailey Williams in the music video for "Hard Times", from the band Paramore. Image courtesy of YouTube.

Heading back to school fresh from the summer, it can feel like new music is at a standstill when you’ve listened to the same hits on repeat all summer. Don’t stay stuck in a rut. Here’s a list of songs to start off your school year with a variety of music to beat the blues and stay motivated.

1. This Must be the Place -Iron and Wine, Ben Bridwell

Nope, this is not the Talking Heads song. But it is a gorgeous song. If you’re adjusting to a new home, new classes or a new life entirely, this song understands finding your new place and experience. It also offers surprising concepts in its lyrics -“I guess that this must be the place- I can’t tell one from another / Where I find you or you find me?”

A highly energetic kick from Paramore explores surprisingly depressing times in an offbeat way. Coming back to the school year can be a swift drop into reality and responsibilities, but as demonstrated by this song, there’s hope and a way out of this mess. The colorful, creative video doesn’t hurt either.

Johnson’s acoustic ballad offers a downbeat feel when you’re unsure what’s next. With lyrics like, “We’re just human/Amusing and confusing, We’re tryin’ but where is this all leading/We’ll never know”.

As long as we’re back, why not have fun? This song offers a great beat along with the message, to never forget to have fun and enjoy life, no matter how busy we are.

You can’t ever have too much Aretha. And you can’t argue that in busy times, having a weight taken off or helping ease someone else’s is invaluable. Franklin’s version is uplifted as always by transcendent vocals and her own undeniable style.

This song uses the image of an unseasonable chill in a usually hot month, to connect to the pain of spurned love left waiting in rejection. Dr. John, keyboardist and guitarist on Morrison’s album A Period of Transition, described the song as a “…cross current from forties to seventies music. It’s like where Ray Charles left off… a real tear-jerker that gets back to the basics of music.” On main piano with gospel-style backup vocals (and even a saxophone riff), Morrison’s yearning vocals hearken back to Charles’ or those of Otis Redding’s.

A summer classic from Donovan, with a yearning for an endless hot summer by “a beach at sunset”, inviting the listener to a beach where summer never ends. With Donovan’s own offbeat and exceptional songwriting, there’s a reason this song has endured as one of his best-known.

In a month of transferring back to school, this song feels apt for time of transition and often of leaving home and loved ones. It reverberates with longing detailing of a long-distance love, with a few calls to the season – “By August she was mine”- accompanied by tight, rich harmonies and composition.

9. Until the Night turns – Lord Huron

Folk rock band, Lord Huron, brings from their second album a robust ballad with a galloping beat. Yet, disarmingly contemplative lyrics about where life is going and where we feel we ought to be headed.

Some traces of Tracy Chapman seem present in this unusual song from Ed Sheeran, on an otherwise transitionary album. An upbeat and hopeful entry, it shows Sheeran in a lighter acoustic mode, although keeping the pop vocal backups that make some of the other songs on his album better-known.

Finally, this song will keep your nostalgia for summer and sun going if you’re not ready to give up on it just yet. It features characteristically strong harmonies and fun flute and percussion additions. There’s a reason it was used at the end of “American Graffiti” (1973) to signal the end of a season and nostalgia for simpler times.