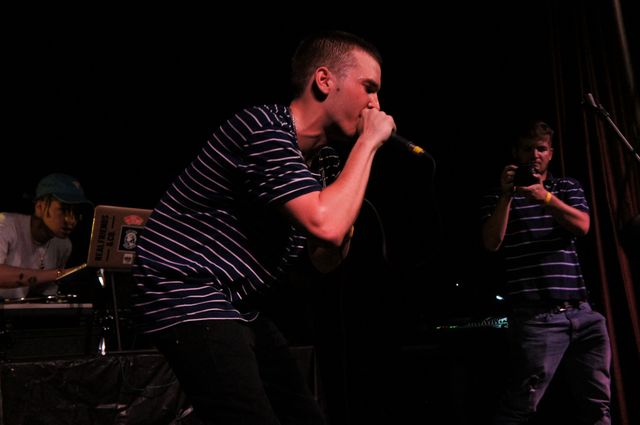 Different kinds of concerts have different vibes, and there are no concerts quite like hip-hop concerts, for better or for worse.

The Chico Women’s Club hosted a concert on Friday featuring local artists that all have roots in the Chico area. Artists including Apollo Snow, Osho Brown, Efren Trevino and 7NAMEZ were there, among others. This event was organized by Daniel Alexich-Duran, who was able to share some words as to how this event came together.

If Chico doesn’t seem like the kind of place where hip-hop thrives, it’s because it’s not. Duran was aware of this but also thought that these performers deserved a platform. He mentioned that this kind of music “doesn’t have the right taste in everyone’s mouth” and that being able to run the show in the Women’s Club took some “sweet-talking”, but it all ended up working out.

I’ll agree that this kind of music isn’t for everyone, but in listening to the various artists on this show, one thing kept coming through; passion. The turnout for this show wasn’t very big, there were some occasional technical difficulties and the real show started about an hour and a half after it was supposed to. Despite that, each and every performer that went up on stage bared their heart and soul during every song. The crowd ate it up and I could tell that I was watching something unique unfold.

The sound itself wasn’t as unique. Songs were performed with passion yet the hard work being put into the performance didn’t come through in the lyrics. There’s plenty of worse rap out there, but there’s also plenty better. That being said, the reason to attend this show wasn’t for revolutionary songwriting.

The rap and hip-hop genres have a sense of family and community that doesn’t exist in any other kind of music. That feeling comes through even more during a small, local show like this. I’ve never heard of any of the performers on this show, but I could tell that they were loved by the audience and by their fellow artists. Going up on stage and captivating a crowd of any size is difficult and these local musicians made it look easy. The crowd was loud, invested and as passionate about the music as the people creating it.

This show was the first of its kind for the Chico Women’s Club and it likely won’t be the last. Members of the rap and hip-hop community in Chico are dedicated to making their scene grow and eventually start playing shows in the Senator and El Rey theaters.

Chico isn’t the biggest town out there and it’s not lacking in local artists. The hip-hop scene is small right now and according to Daniel Alexich-Duran, “…it’s growing…we need our community to get bigger, we need Chico.”