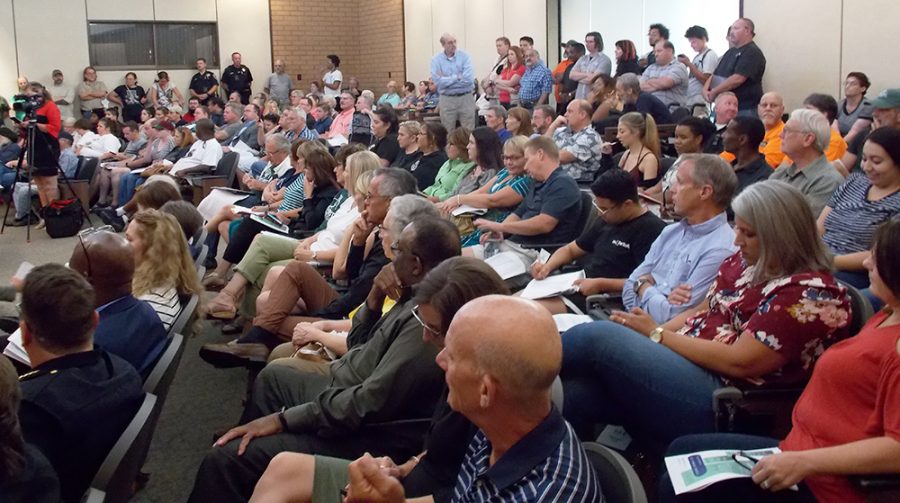 Council Chambers were filled to standing room only, at Tuesday's city council meeting. 43 people requested to address the council over the talks of bringing back the sit-lie ordinance. Photo credit: Josh Cozine

Seats in the city hall council chambers were filled to standing room only at Tuesday’s city council meeting. Mayor Sean Morgan even addressed the crowd to inform anyone still looking for a seat, that there was a conference room next door with more seats and monitors live-streaming the meeting.

The pressing item on the agenda for most, with 43 requests from the public to speak, was talk of reinstating the sit-lie ordinance, which had been effect in Chico between 2013 and 2016. This ordinance prohibited people from sitting or laying down on sidewalks or other public places. The vote would be on whether or not to continue pursuing the option by directing the city attorney to research options for the ordinance.

Events got so heated Mayor Morgan called for multiple recesses before finally calling an order to clear everyone from the council chambers except for staff, media and city councilors. The call was made in accordance with The Brown Act, which states the city council may clear the room if a group willfully interrupts the meeting to the point it cannot continue.

While some audience speakers supported reinstating the sit-lie ordinance, most speakers did not support bringing the ordinance back. Those in favor brought up arguments involving business interests, child safety and simply not wanting to have to step over people. Those against the ordinance said that it would unfairly criminalize and discriminate the homeless and many called the measure a band-aid solution at best in the face of the larger societal issues.

Before the floor was opened to the public for commentary, a report was given by Chico Deputy Chief of Police Matt Madden. In the report Madden said that police look at the ordinance as another tool for police to engage with people who might not otherwise talk to police. He pointed to the low number of citations issued when the ordinance had previously been in place to show that police weren’t using it to criminalize the homeless. Thus, according to Madden, the ordinance was effective.

City Councilor Randall Stone brought up a 9th Circuit Court of Appeals ruling that was decided upon earlier that day. Stone requested that this ruling be added the city attorney’s research. The ruling stated that it is unconstitutional under the cruel and unusual punishment clause of the eighth amendment to issue a citation to someone for sleeping in a public place, “when no sleeping space is practically available in any shelter.”

After the report from Deputy Madden, and a brief discussion among councilors, the floor was opened to the public. Due to the high volume of requests to speak, the normally allotted time of three minutes was reduced to one minute at Mayor Morgan’s discretion.

One speaker, Jamie Lin, said she, “shouldn’t have to step over people,” and urged the council to reinstate the sit-lie ordinance. She also said areas like business fronts and bus stops need to be accessible for paying customers.

Another speaker, Sandra O’Neil, said that she originally comes from the historically segregated south and she recognizes discrimination when she sees it.

“They can’t sit here, but our kids can,” she said was the argument many speakers in favor of the ordinance were making, which is discriminatory sentiment.

As more people got up to speak, many attendees began cheering for when they agreed with a speaker. Morgan reminded the crowd such outbursts were not allowed in council meetings, and called two separate recesses as cheering continued intermittently.

Finally after a group began chanting and shouting, Morgan cited The Brown Act which by law allowed him to clear the chambers.

@theorion_news Chico City Council chambers were cleared out due to audience outbursts after public commentary time had ended for discussing the possibility of bringing back a sit/lie ordinance in Chico pic.twitter.com/S1VfTwGys5

Councilor Karl Ory then requested that the public be allowed to re-enter, but his request was denied and the discussion was moved to a vote on whether or not the council would direct the city attorney to continue research on the sit-lie ordinance.

The vote passed 4-3 down party lines, quietly, in the empty chamber halls.

Check out our video coverage of the sit-lie ordinance discussion.