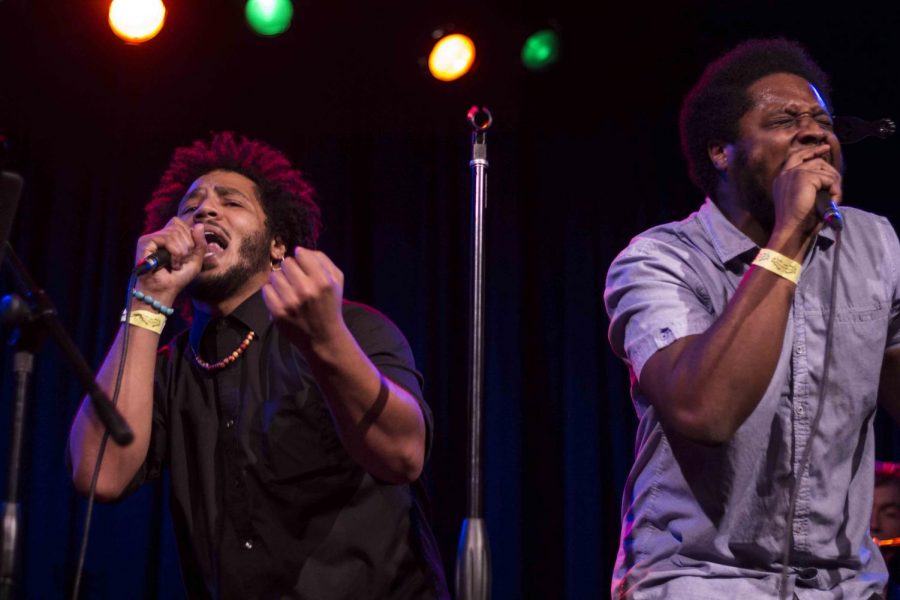 The Collective, comprised of over 40 different artists in the North State, received over 100 submissions after opening their applications up in February. They eventually settled on 15 songs for their first performance, selling out Sierra Nevada Brewing Company’s Big Room Thursday evening.

Joshua Hegg, Uncle Dad’s Art Collective organizer and keyboard player, has been planning the event for over 8 months, working with the orchestra and singers to bring new life to their music.

“Our goal is something you’re not going to see any night of the week in Chico. Something bigger,” Hegg said.

As different songs boomed throughout the Big Room, performers showed off their unique sounds while mixing with other musicians to depart from their usual sound. This resulted in fresh and unique musical combinations.

Aaron Jame and Calvin Black of F.A.M. (For All Mankind) had attendees out of their seats dancing to their soulful performance. Michael Cremer and his band, Eyes Like Lanterns, showed off impressive range with a blend of indie folk rock and Southern Blues. Chico State alumni, Roxanne Winslow, asked listeners to listen for a personal meaning in her song.

Pat Hull, a faculty member of the Communications department at Chico State and known in the past year for many performances around Chico, joined the stage after Winslow. He stayed solely on vocals a departure from his signature acoustic style.

Although Uncle Dad’s Art Collective has sold out the Big Room multiple times, Hegg said that he felt the need to showcase their talent on an even broader scale. This is the first year the entire group performed in Weaverville, Orland and Redding following their Big Room performance.

Uncle Dad’s Art Collective is also preparing for their yearly tribute show, which will be a rendition of “Madonna”, taking place from January 24th-26 in Laxson Auditorium. They hope to provide new meaning to the legendary artist’s music.

“We take the spirit of Madonna which is like feminism and equality and sexuality, and we’re playing around with that concept as we’re creating this show that’s going to be pretty ridiculous and fun and inspiring, hopefully,” Hegg said.

This is the first year the entire group performed in Weaverville, Orland and Redding following their Big Room performance. With such a successful tour and gathering of artists, the group looks forward to their next events. “You can set your sights for something ridiculous like, ‘I’m going to put together this huge touring show,’ and in Chico you can somehow do it,” Hegg said. “Most other cities, I feel like it wouldn’t be possible. You’d have to settle for less, or there are too many barriers.”

“In Chico, there’s really no barriers (to musicians).”

Brian Luong and Natalie Hanson can be reached at [email protected] or @brianluongorion or @NatalieH_Orion on Twitter.