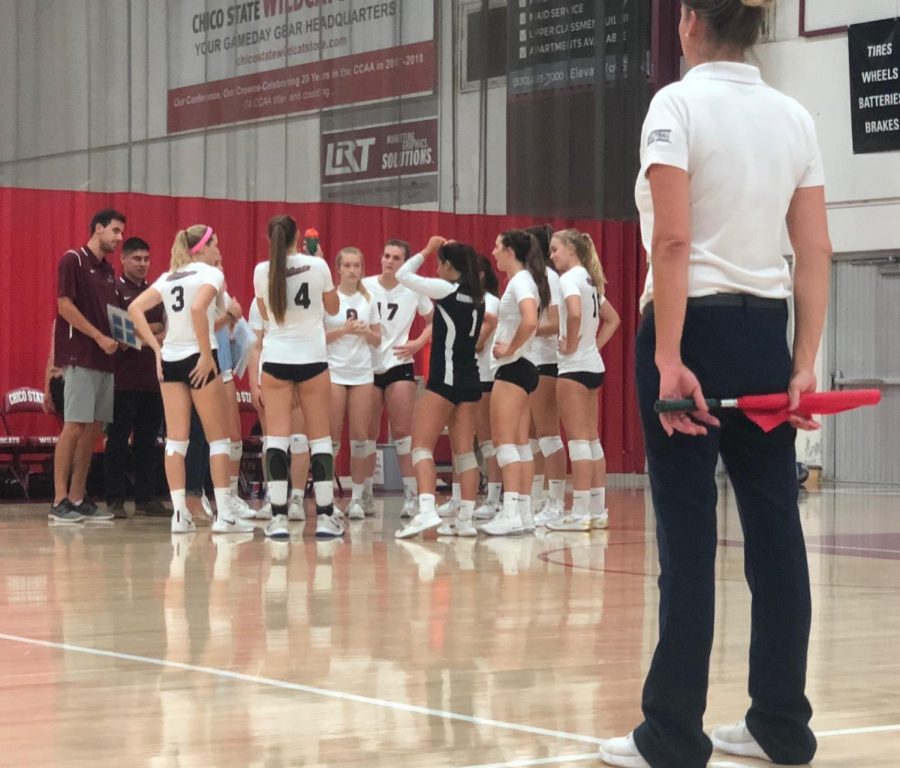 Chico State game plans before the start of the match against Stanislaus State on Wednesday. Photo credit: Wesley Harris

Chico State volleyball bounces back from a miserable opening weekend with a five set win against Stanislaus State on Wednesday. This five set thriller was just the type of win the team needed to get their season back on track after going 0-6 in sets over their 0-2 weekend.

When the first set was won, the relief wasn’t felt for long. The horrible weekend looked like it might have just taken a one set break after the Wildcats dropped the second and third sets. Only for the Wildcats to rally back and win the last two sets outscoring the Warriors 40-23.

“Coming off an 0-6 weekend doesn’t feel good,” Boyle said. “I’ll take any win I can get. A win in five almost feels better, overcoming that adversity and coming together in those last two sets feels better for a team.”

“We’re not built super big. But I always tell people they’re either big or they’re slow and we’re either short or we’re fast,” Coach Cody Hein said. “We like to make it a speed game instead of a size game. The only way to do that is by passing well, it opens up everything else for us.”

Chico State volleyball hopes to continue winning with a game this Saturday against California State University Monterey Bay at Seaside at 5 p.m. This is an essential game against a division rival who made the California Collegiate Athletic Association playoffs last year. That would bump the Wildcats to 2-2 in the CCAA North Division and 9-3 overall on the year.

“I feel good about our next game. Monterey is notorious for being a scrappy team and I think we proved tonight that we’re more scrappy,” Fogel said. “We’re ready to go down there and give them a battle.”