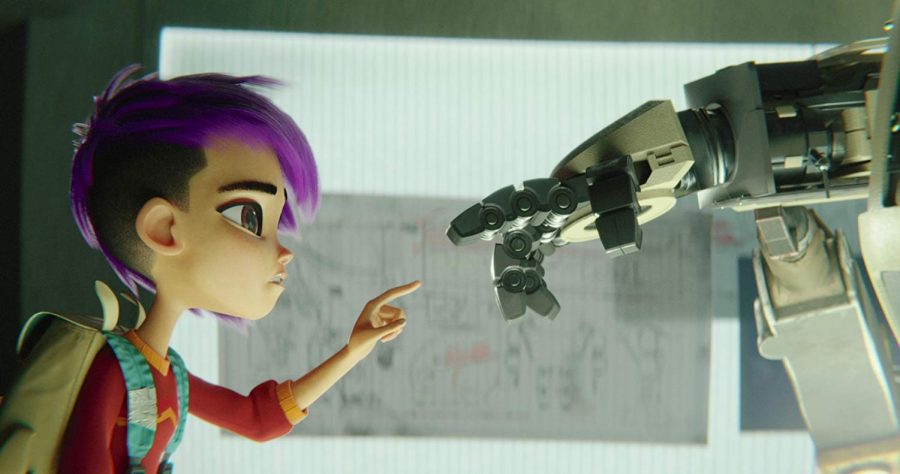 A scene from the new animated film from Netflix, "Next Gen."

Netflix continues its trend of putting out movies that make people say “oh it’s like (insert movie) but not as good” with “Next Gen.”

You’ve got a girl and you’ve got a robot, and they’re going on an adventure where they will learn about each other and themselves while fighting evil. Have you fallen asleep yet?

“Next Gen’s” biggest problem is that its pacing is out of whack. It starts off really slow with nothing happening for the first half hour or so. When the pace finally starts picking up, the movie spends most of the middle act developing the main characters, Mai and 7723. Guess which of those two is the robot. The problem is that Mai has no clear motivation other than fighting injustice which apparently means running through town every night committing random acts of vandalism.

The third act of the movie just blasts through a checklist of resolutions that the writers must have thought a modern animated movie needs. Mai’s mom is obsessed with robotics but she suddenly decides that her daughter is more important. Mai’s angst and rebellious attitude could have easily just come from her mom ignoring her, but she also apparently has abandonment issues because of her dad leaving the family; the movie decides not to resolve that.

Everyone knows that an animated movie that kind of looks like Pixar needs an emotional ending. The final moments of the movie do its best to tug on your heartstrings, but without developing either main character to the point where the audience will care about them, it does nothing. Sad music and characters with tears welling up in their eyes aren’t enough to make someone feel for what’s happening on the screen.

Has the message of over-reliance on technology not been hammered into you enough? Don’t worry “Next Gen” is here for you. Of course a movie set in a wondrous future has to tell you that amazing technology has its downsides. And I bet you’ll never guess that the head of the company that makes all the robots is secretly evil. I won’t say how it ends, but if you spent like 10 seconds thinking about it you’d get most of it right.

In fairness, the movie is animated well and the setting is fleshed out decently enough. 7723 is ironically the most relatable character in the movie. He also delivers most of the funny lines in the movie. Most of the humor doesn’t really hit its mark, but it thankfully never gets too desperate or predictable.

“Next Gen” isn’t terrible by any measure. In trying to do so many things to be like other popular animated films it ends up being pretty generic and forgettable. A movie like this could be forgiven if it had some special edge that really separates it from the pack, but the best it can do is to just be average. A middle of the road movie gets a middle of the road three stars.