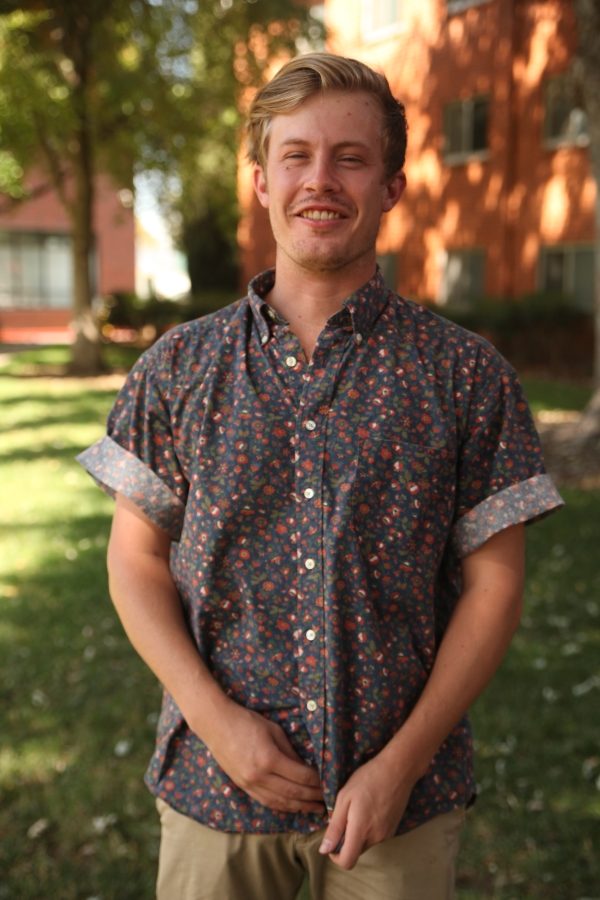 The venue screams close quarters. Purple, teal and pink lights shine across artistic renditions of famous musicians as Chase Avalos makes his way to the stage. Microphone feedback breaks the still air as he plugs in his guitar, breathes in the intimate crowd’s energy and begins a song.

At the first Open Mic Night, hosted by Associated Students Productions on Thursday, Chase Avalos of the indie Rock band Stepdad Passport opens with a joke. “I wrote that song with a band I’m in called Stepdad Passport, so, I’m the stepdad—I grow out my mustache; shave everything else, looks bad,” he says. Laughter rises and quiets as heads begin bobbing to the steady rise of his next song.

Whether it’s getting on stage once or entering the music industry as a whole, Avalos believes that first impressions are important and they better be good. Every truly great band throughout history has had that something special. That’s what he and his band, Stepdad Passport, are after—a specific sound that will take the band where it wants to go.

Avalos has been making music since age 11. After two separate bands, multiple instruments, supportive friends and just enough self-doubt, he just may be closing in on what he’s looking for.

We sat down with Avalos on a sunny day to discuss his music career and future plans.
[Q]: So how about future plans, where are you hoping to take your music career from here?
[A]: Well right now, uh, I’m in a band called Stepdad Passport that I started a few months ago… We’re planning on releasing an EP by winter. So, taking little steps. But, for the future, I plan to be a touring musician… and that’s pretty much where I’m going at this point, just tour life baby.
In the past, Avalos went through multiple different phases of music—jumping from Linkin Park to Reel Big Fish to excessive reggae. But he finds the 90s alternative scene has been particularly influential with respect to his modern work.

His voice intensifies as he mentions names like Audioslave, Stone Temple Pilots and Nirvana. Sitting in the sunlight on the grass, Avalos begins strumming his guitar and shares one of the 15 or 16 songs he considers good enough for others to hear.
[Q]: Do you put your music on Spotify or Apple music, anything like that?
[A]: In terms of like something professional like Spotify and Apple Music, I don’t feel like I have anything of that caliber yet. That’s, you know, the EP that I’m working on right now. Like I’m just putting night and day effort into it. I’m just writing and writing and writing—reforming and recreating—building it from the ground up. I’m just trying to make the best possible songs I can make… As an artist, I’m really hard on myself.
Avalos has a specific vision for how he wants to sound and he thinks he’s finally closing in on it. He’s working tirelessly with Stepdad Passport to iron out the kinks before making a real first impression.

Avalos begins strumming another one of his songs. A smile spreads across his face as he sings his lyrics. It’s clear that performing, in any capacity, brings him some kind of satisfaction.

[Q]: What do you personally get out of performing on stage?
[A]: I want to write music for other people to hear. At heart, I’m a performer… I used to be a swimmer for a while, that was like my, uh, my outlet. I just got everything out… I got injured; stopped swimming and all these problems started hitting me… But as soon as I picked up music and started performing, that 30 minutes to an hour on stage is just like complete euphoria… I want hecklers; I want people to talk to me. I want people to be mean to me so I can talk back to them… I really just love interacting with the crowd—getting them involved.
[Q]: Do you think dealing with that initial paranoia of performing on stage has been the hardest thing to overcome in your music career?

[A]: Oh yeah, even before like every show… I still think ‘oh dude, what if I hit a sour note,’ I think just, most artists have that sort of beat-yourself-up mentality. You know, like it’s gotta be good. But once I get up there, I remember that I’m just here to have a good time… I just try to make sure everyone has a good time, including myself.
Avalos decided to become a performer after the first time he shared his music live. He has a true passion for music, making it his desired direction in life. Keep an eye out for Avalos and Stepdad Passport in our local music scene – they have their sights set on making a name for themselves in the Chico community and beyond.

Grant Schmieding can be reached at [email protected] or @G_Schmieding on Twitter.