Chuck Epperson: A human defined by martial arts and music 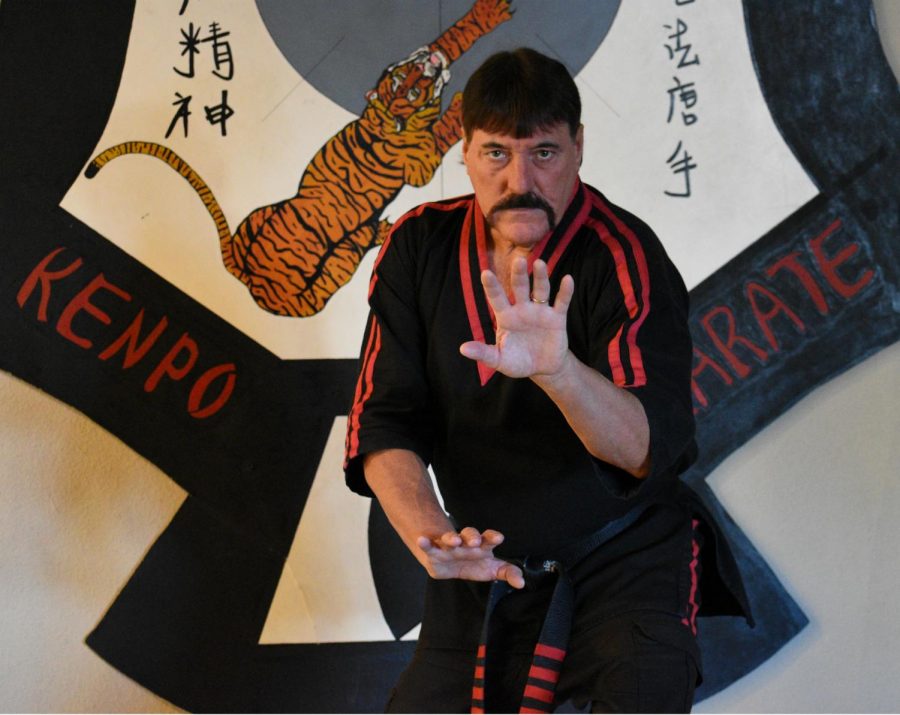 Chico State may be Chico’s most known school, but ask professional martial artist and they’ll tell you about the Epperson Brothers Kenpo Karate Dojo. Founded by and run by Chuck Epperson, this dojo specializes in teaching people American Kenpo Karate and Filipino weapons training.

Epperson’s weeks are packed as he teaches various martial art forms six days a week and plays music gigs whenever possible at night. He’s written his own original music since he was ten and has trained in Kenpo nearly every day since he left high school. Here’s the story of how a ninth degree black belt Kenpo Karate master balances the art of movement by day with the art of music by night.

Q: What got you into American Kenpo Karate?

A: My dad taught me to box and street fight when I was four years old in Woodland ‘cause Woodland was a really really violent place. And so I had to use my athletic skills, my boxing and street fighting skills just to get home from school every day.

Basically right out of high school in the ’70s I was introduced to Kenpo Karate and that’s what I started back when it was bare-knuckle, full-contact karate. It was obviously my calling in this life because I have not stopped doing it and I’m probably still more passionate about it now as I was then. Just like Filipino arts and music. I mean martial arts and music are the two art forms that make up who I am as a human, period.

Q: Why should someone get into martial arts?

Martial art is an individual thing. It’s about you. And it covers everything, mind, body, spirit, the philosophy of being humble, being respectful of all people, having self-restraint, having love, compassion, patience and tolerance for other humans. To me if you’re going to call yourself a martial artist (and) you’re not living by these philosophies, then you’re not a martial artist in my opinion. You’re just a wanna-be gang member, street fighter or bully who likes to hurt people because you have issues. So (martial arts) takes care of this kind of stuff. It covers every area of your life.

Q: How much do you charge your students?

I don’t have many rich people training here. I have single moms on welfare. So this is how I’ve always done it, to me the main thing is this: your desire because desire is everything. If I’m going to give you everything I’ve got, then you have to want to be here.

I will literally look at a parent (and say) ‘How much can you afford?’ And whatever they can afford, that’s what they pay. Any other karate school in this town, you’re signing a contract and you’re going to pay those thousands of dollars no matter what. In other words you’re going to have to be very wealthy to train in those schools because most people cannot fork out that kind of money. So I do it on a sliding scale. I still teach people for free…If you really want to do it bad enough, I’m here for you. I’m not taking that away because of money. It’s that simple.

How do you balance your Kenpo and music careers?

Well obviously, music is the thing I do less because that’s not how I make a living. I do a lot more martial arts and teaching every day, all day long, than I do gigs. I do a lot more of running my dojo and teaching six days a week like I have forever, all day long. And then I would do gigs at night time. And I just get gigs wherever I can, I don’t really play in Chico that often, I play out of town a lot, but I do play in Chico too. I probably played in Chico more often this year and last year more than I have in ten years probably.

Q: What’s the name of your band and what instruments do you play?

Chuck Epperson Jr. Band. I only play guitar. I played bass guitar in the church band. If I wasn’t a guitar player, I’d be a percussionist or drummer. I love congos and bongos. But mainly I play rhythm and lead guitar.

Q: What got you into writing and performing your own original music?

It starts back in Woodland in the early ‘60s because I was raised there in a Holy Roly Gospel Church, a Pentecostal Church. I started singing in (our) church band when I was three and I was playing (guitar) in the church band when I was five. When I was six years old, in 1964, I had my first rock and roll band. We would put on little concerts in the garage and all the kids would sit on the slanted driveways and we’d play all the ‘60s hits.

Four years later we moved to Chico, in 1968, when I was 10, and that’s when I decided I was going to start writing my own songs. My grandma Sarah Epperson, my dad’s mother, was a musician too and so was my dad. Matter of fact there are some silent, eight millimeter films of me and her jamming together out at their ranch, farm house out in Live Oak, with me playing guitar and her playing violin. And she taught me how to play harmonica and she was a big influence of my music too. I said, ‘Hey grandma I wrote my own song.’ And she said, ‘Let me hear you play it there Chucky.’ So I played her my first song (when I was ten) and she said, ‘I want you to promise Grandma Sarah something Chucky.’ I said, ‘Whatever,’ because she was my hero. She goes, ‘You have a god-given talent and I want you to promise me that you’re going to keep writing your own songs and you’re going to get out there and play your music and don’t hide it on the shelf.’ I said, ‘Ok,’ and that’s what I’ve been doing since I was ten. And I’ve been performing nothing but my original music since 1977. So that was pretty much the beginning of all my music and I just fell in love with it.

Epperson’s dojo is located at 1215 Mangrove Avenue. To set up an appointment call (530)-895-8257 or visit his website called Epperson Bros Kenpo Karate.