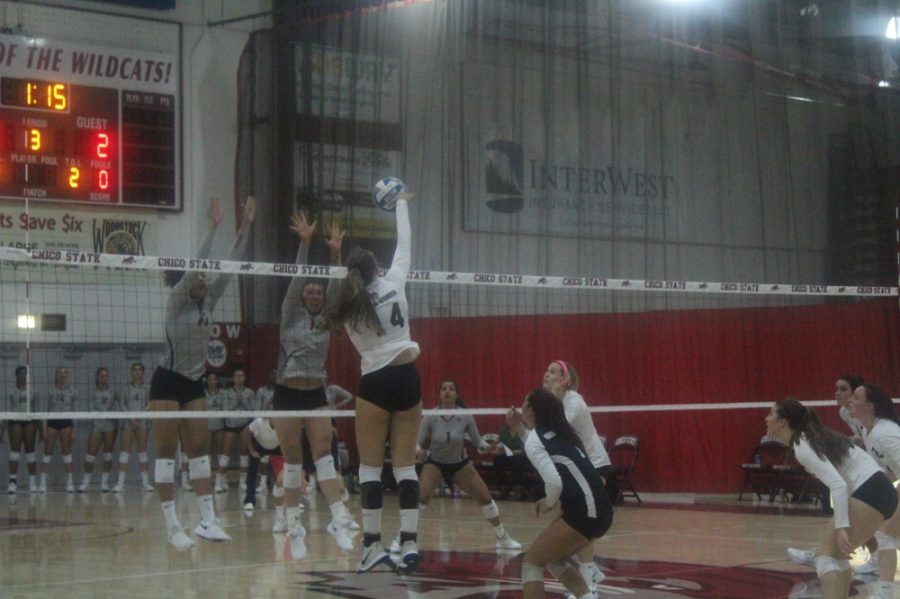 Riding the momentum of a two-game win streak from last weekend, Chico State was looking to continue to build their lead in the California Collegiate Athletic Association North Division to 3-2 and 10-3 overall. In their way stood San Francisco State the team right behind them at 2-2 in the North Division and 7-4 overall.

The Wildcats and Gators clashed and had a back and forth contest with the end result being a Wildcats’ victory in five sets, 25-20, 25-9, 21-25, 23-25, 17-15. Junior Nicole Desrochers lead the Wildcats with 50 assists. Her defense at the net and at the back assured the Wildcats were always in a position to win.

“Defense is one of, if not the most important aspects of the game,” Desrochers said on what her defense means to the team. “I take pride in it and as a setter I need to play defense in the back first. Even before I set, it’s my first responsibility.”

Other notable Wildcat performances came from Bekah Boyle with 20 kills and 16 digs as well as Kim Wright with 11 kills, eight digs, two block solos and two block assists. These were crucial performances, because aside from Chico State dominating the second set 25-9, all the other sets came down to as little as 5 points at the most.

Chico State was down by as many as nine points in a set and never gave in and made every set competitive. In the fourth set alone, there were 15 tie scores and nine lead changes. The Wildcats ended the fifth set with four tie scores and two lead changes to pull off the hard fought victory.

“We like to give the fans some excitement and keep them on their toes,” Wright said about her teams need to cut things a little close. “A goal of ours is to win every fifth set. We love them and it’s when we shine the most.”

“I expect us to come out with the same fire as today,” assistant coach David Irving said. “I’m expecting East Bay to come ready to fight. I hope it’s not another five-set thriller but we’ll take care of business either way. We want to establish ourselves as leaders of the North and that’s what this weekend is for.”