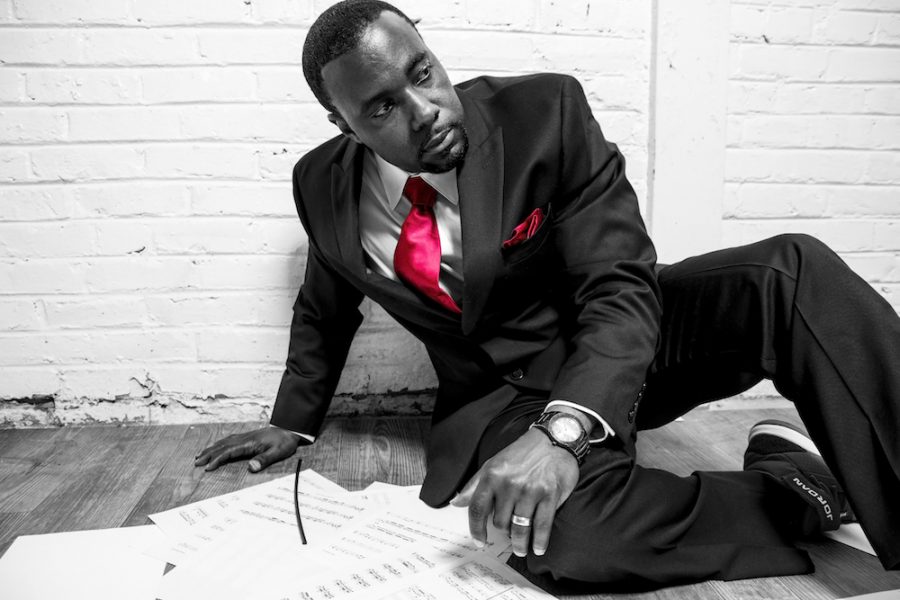 Jeffrey McNeill, known as Thee Phantom, has blended hip-hop with classical music with his group since 1987. Image courtesy of Jeffrey McNeill.

If hip-hop and classical music seem like an unlikely combination, Thee Phantom is here to change everyone’s mind. Phantom and his group of musicians are releasing their third album on Oct. 9, and aim to reach college students all over the nation with their unique musical style.

Phantom and his Illharmonic Orchestra ensemble hold the distinction of being the third hip-hop act to headline their own show at Carnegie Hall in New York City. They have now performed at over 50 colleges and universities in the last 5 years. In 2017, Phantom‘s track “A Song for You” reached over 250 college radio stations.

Looking back on a career of several decades, Phantom said he got his start in 1987 and has been touring nearly every year since. He fondly remembers the early years of discovering his style.”The first couple years were formative and I spent them mainly learning, composing and making concoctions,” he said.

“In the early 90s, I started to infuse my own music with this blend.” By this, he refers to his distinctive mixing of hip-hop and classical music. It sets his ensemble apart and enabled them to start outperforming in large concert halls.

“We try to make it a different experience, taking hip-hop out of the nightclub,” said Phantom. He said he aims to reach a wider audience in bringing hip-hop style to these venues, which usually perform classical music.

“We’ve created a pretty cool dynamic,” he said. “Most of the audience has not been there before…in these huge concert halls.. and they’re surprised to hear us introduce hip-hop and an orchestra into this.” For him, part of his purpose is found in giving listeners an experience unlike any other.

By the latter half of the ’90s, Phantom and his ensemble considered performing in the “college circuit” on campuses, as an alternative to touring only in larger music halls.

“These were 40-, 50-year-old musicians,” he said, referring to former performers in the Illharmonic Orchestra. “They’d been playing music for sometime over 35 years and weren’t necessarily in tune with hip-hop.” He said he chose to bring in younger musicians to further develop the group’s sound.

“These younger musicians grew up with classical and hip-hop,” he said. “They believed in what they were playing and the audience could see it.”

Phantom says he wants to appeal to what he calls “the melting pot” of concertgoers, by playing on college campuses and attracting younger listeners. He once worked for Apple as a records and operations manager for 8 years, and was recently featured in a documentary by Apple known as “Thee Phantom: Behind the Scenes.”

His classical inspirations include Beethoven, Vivaldi and Chopin. As for his current favorites in hip-hop, he mentioned artists such as Slick Rick, Kendrick Lamar and J. Cole.

“When I hear something from these individuals, I get excited… I wanna jump in the booth and start making music,” he said.

“The work they put in is clear and you can feel it right away.”

Offering advice to newcomers to the music industry and young musicians, he emphasized strong business sense. “(Being a musician) is 10% music and 90% business,” he said.

“I wear many different hats. You have to really know how to do it all yourself before assigning all the steps to other people… it’s about learning the business first.”

Thee Phantom believes that when it comes to actually producing music, being true to yourself comes first. “Music should come from within,” he said.

“I don’t wanna follow the trend. My fans have appreciated that, they love that they’re getting authentic material. It’s about being true to yourself.”

On Oct. 9, Phantom and his group will be releasing their 3rd studio album entitled, “Maniac Maestro.” Watch out for our review of this album next.