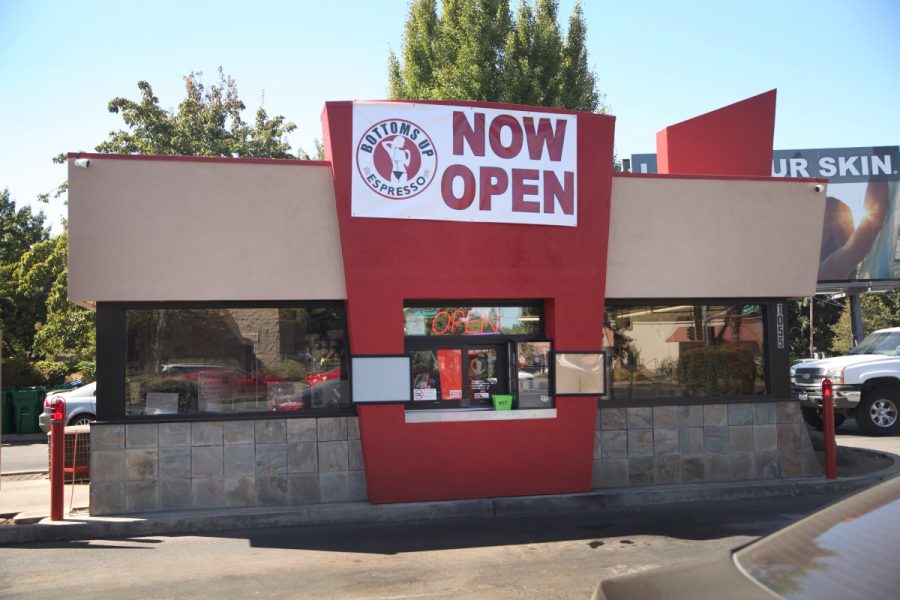 Bottoms Up Espresso opened Friday after receiving criticism for the attire of their employees. Photo credit: Caitlyn Young

Chico’s newest coffee stand is finally open, and the rumors of bikini baristas are true.

Bottoms Up Espresso opened Friday but had already generated buzz for the last month due to the franchise’s reputation of mandating their servers to wear minimal clothing. The business has drawn criticism from Chico residents who feel the employees display inappropriate attire in one of the city’s busiest intersections.

The following baristas interviewed asked for their last names to be excluded from the article.

Kelly isn’t immune to criticism but realizes the opening of each prior location caused a similar response.

“It happens everywhere. It happened with every other stand. It just takes time for people to adjust,” Kelly said. “It’s something new, not something common, but I think people will warm up to it once we get going and they see that our coffee is really good. Customer service is our number one thing, it’s just not about dressing up in bikinis.”

Larissa, who began working Saturday, appreciates her work environment and enjoys conversing with the customers.

“I love working here. I have another job too and it’s not as easy to get up for that job, but this is so fun. You’re getting dressed up and coming to work with all these other cute girls that you love talking to and hanging out with,” Larissa said. “It’s not a bad time talking to people out the window and having a good conversation with everyone.”

The servers dress according to the day of the week.

Fridays allow for the most leeway as the baristas coordinate with each other to choose a common theme.

Bottoms Up Espresso opened its first location in Modesto, Calif. in 2011. Since then, they’ve opened six more locations across California and are in the process of expanding to the Sacramento area.

The coffee shop, which once operated as Java Detour, can be found on the corner of Mangrove and East 1st Ave and is open Monday to Saturday from 5 a.m. to 7 p.m. and Sunday 6 a.m. to 6 p.m.

In addition to drinks and food, the menu offers apparel for sale as well. However, Larissa stated, the shop currently has not received any gear so those interested can only buy online.

According to their website, the stand is still hiring. The company asks for a photograph as part of the application process.

Ultimately, Larissa hopes those against Bottoms Up Expresso opening in Chico understand the employees mean no trouble.

“I don’t want to do any harm to you. I just want to sell some coffee. I got a smile for you just like I got for everyone else,” Larissa said.