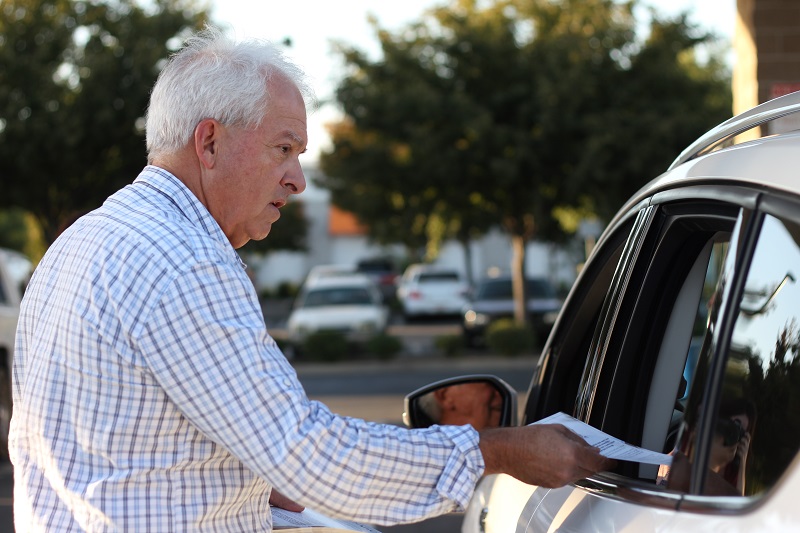 John Cox made a stop in Chico, on Friday, on his statewide bus tour.

John Cox is a candidate for governor for this upcoming midterm election. He won a chance to campaign for governor in the Calif. Republican primary back in June, alongside Democratic primary winner, Gavin Newsom.

After he exited his tour bus painted with the hashtag HelpIsOnTheWay on all sides, he walked over to the Costco gas station to talk to customers about the gas tax and his platforms in general. Cox is a strong proponent of Prop. 6, which would repeal the Road Repair and Accountability Act—commonly known as the gas tax.

“I came here to talk about affordability in California,” said Cox. “We’ve got outrageous gasoline prices that are really pushing people into poverty.”

The gas tax in Calif. pays for road maintenance and repairs. California’s proposed budget for the fiscal year of 2018 is estimated to generate $16 billion from fuel taxes and vehicle fee, according to Caltrans Department of Finance. About $9.5 billion of that will be used for highway repairs, maintenance, and public transit.

“That would be ok if we used the money efficiently,” Cox said. “California spends almost twice what Texas spends on building and maintaining a mile of road.”

Homelessness was talked about a lot during the primary and is a big issue between the current two candidates. Calif. has the largest homeless population in the country and ranks third in per capita homeless rate, according to the U.S. Department of Housing and Urban Development: The 2017 Annual Homeless Assessment Report (AHAR) to Congress.

“I just got done touring a shelter for women that transitions them from being homeless to producing for themselves,” Cox said. “The first step is they get cured of substance abuse and that’s incredibly important.”

To make college more affordable he wants to get professors teaching more classes and reduce the overall administrative cost.

“Trying to get professors to teach more than one class is like pulling teeth,” Cox said. “College cost so much because you’re paying professors a couple hundred thousand dollars a year and they’re only teaching one class or no class.”

After about ten minutes of Cox talking to customers, Costco security asked him and his campaign team to leave. He later went to the North State Republican Headquarters in Chico to give a speech and talk with some of his supporters and constituents.

The next stop on his tour was Redding, Calif. early the next morning.

Justin Jackson can be reached at [email protected], or on Twitter @JustJack0176