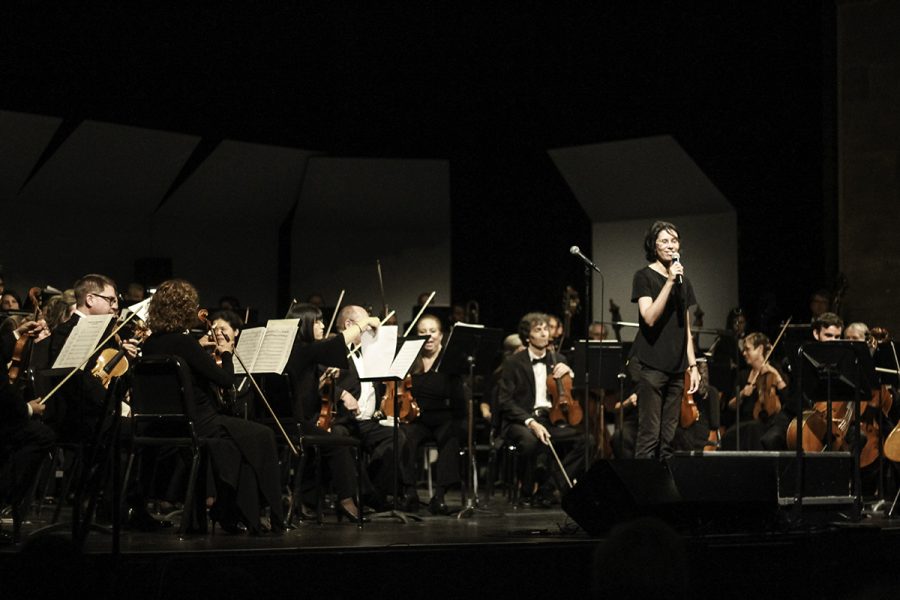 The concert “Masterworks 1: American Made” on Saturday was the latest symphony brought to the Laxson Auditorium by the North State Symphony (NSS) this semester. The show had a big emphasis on community. “Despite a world full of diverse languages and cultures, we all share the language of music,” said Scott Seaton, Music Director and the lead conductor for NSS.

The show featured the guest artist band, Project Trio, a New York-based ensemble. This show marks the NSS’s first performance of their 2018-2019 season.

Seaton has been the music director for NSS for the past four seasons. Seaton was recently made principal counter of the Verdian Symphony Orchestra and the Bel Castro Singers.

Project Trio played with the orchestra during three of the selections. “Djanglish” was arranged by Stephan Feigenbaum for Project Trio and the orchestra, while “Hungarian Dance No.5” was arranged by Project Trio. The ensemble is one of the most popular current instrumental bands, having 100,000 subscribers on Youtube, as well as being featured on NPR’s Morning Edition and their music series “Heavy Rotation.” Project Trio has a focus on high energy performances and unique, fresh new takes on classical music works.

Reception of the symphony was extremely positive, as many of the performances were met with multiple standing ovations.

Project Trio seemed to be a big hit during the symphony, audience members were laughing and cheering during the sets. The trio had a great energy about them, with flutist, Greg Pattillo, even beatboxing at one point during the performance.

“I loved the show tonight,” said attendant Gale Schmidt. “It was really well done and that trio band was a hoot to watch. They are a very talented group.”

The finishing number seemed to be the one most enjoyed, with many saying it was the highlight of the show.

“The last performance was the best in my opinion,” said Leonard Thompson. “It was the longest but you could really feel it, you know? If that makes any sense.”

The North State Symphony’s next performance will be “Masterworks 2: Mozart’s Influence” at the Cascade Theater in Redding, on Saturday, Nov. 10 at 2 p.m. to 4 p.m.