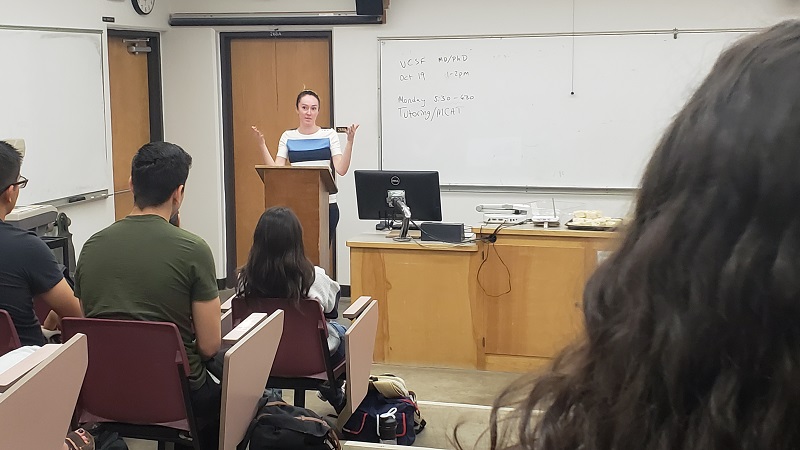 Guest speaker, and Doctor of Osteopathic Medicine (DO), Anna Robertson, admitted to a lecture room full of Chico State pre-med students, Monday, that Med school was very tough and very, very, long, but she would do it all again in a heartbeat.

Robertson, who now works at Enloe Medical Center, after graduation from The New York Institute of Technology College of Osteopathic Medicine with a specialty in pediatrics, took time out of her busy schedule for a Q&A session with Chico State students, hosted by the Pre-Medical Association.

Questions like what sorts of different treatments she’s used as a DO than an MD (Doctor of Medicine) might not use, what’s the best advice she could give someone looking into med school, what her school-life balance as a student was, and would she do it all over again if she could—along with many others—were asked over the course of nearly an hour.

Audience: Have there been any scenarios where, as a DO, you’ve made a different diagnosis than an MD?

Robertson: In my third year practicing, a 12-year-old girl was having muscle spasms, the MD said to give her muscle relaxers. Not a wrong call, but I asked “mind if I try something?” and I used a physical technique that was still fresh in my brain and it relieved her greatly. The muscle relaxers probably would have done the same, but it’s always better to avoid unnecessary medicines when possible, especially with children.

Audience: How would you describe your school-life balance in med school?

Robertson: It was a hard adjustment. I missed Thanksgiving dinners with the family and being able to hang out with old friends, but at the same time I made new friends at med school, so it was still fun in a “we’re all suffering together way.” Looking back now, I miss those days living in the study-hall with friends.

Audience: What’s the best advice you could give someone looking into going into med school?

Robertson: “Go for it!” But I’m very partial to it. If you want to be a doctor you have to love it.

Audience: Do you get enough sleep?

Robertson: Now I do! During residency and med school though, you don’t really. But no one ever looks back and wishes they slept more.

Audience: Would you do it all again?

Robertson: Yes. It took 13 years to become a physician. It seems like a long time, but you’re gonna get there, and what else would you rather be doing if you’re passionate about it?