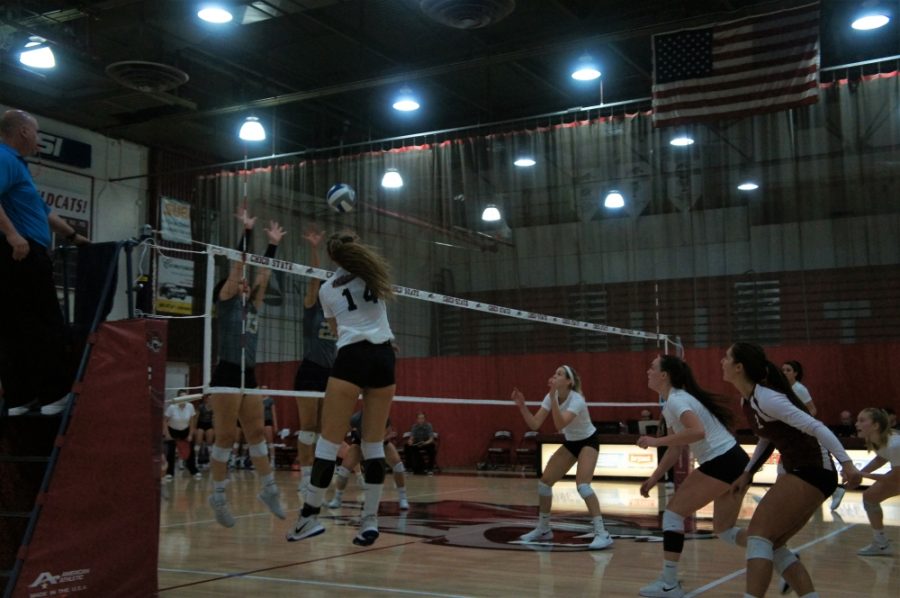 Chico State came into Friday night’s contest against Cal State Monterey Bay hopeful to shake off two straight road losses and a 4-6 North Division record. The Otters were coming in on a four game win streak and tied for the North Division lead at 5-4.

When the Wildcats jumped out to a two to zero set lead while dominating 25-7 and 25-15 the night seemed like it would be Chico’s to re-establish themselves in the division.

That dominance was followed by three straight set losses by the Wildcats and a final score of 25-7, 25-15, 22-25, 23-25, 14-16. They now fall to 4-7 in the California Collegiate Athletic Association North Division, 11-8 overall on the season and have lost five of their last six matches.

“The first two sets we were passing great, blocking well and all our hitters were above .400,” interim head coach David Irving said. “We played scrappier after the second set and that may have gotten in the way. Monterey did a great job on defense and we didn’t do enough.”

There was one tie score and one lead change in the first and second sets combined versus 27 tie scores and seven lead changes in the last three sets. While the Wildcats never got dominated they sure did squander chances in three straight sets to close the game out.

“When you come out and beat a team 2-0 you go into it 0-0, and the other way goes too. Every set is a new set for us,” setter Kim Wright said. “You can’t go into a set with either mindset because both can be counterproductive. We just stick to the game plan and you don’t always get your way but that’s volleyball.”

A seven day break couldn’t have come at a better time for the Wildcats. With eight games left in the season every game becomes crucial for Chico State if they hope to make a playoff berth. The Wildcats next see action on Friday, Oct. 12 at 7 p.m. in Acker Gymnasium against Cal State San Marcos.

“I think the break is well needed. We need to get back in the gym for a great week of practice,” setter Nicole Desrochers said. “We’ll be nice and refreshed for next weekend’s games.”