On This Day: ‘Goodbye Yellow Brick Road’ is the Elton John we know and love 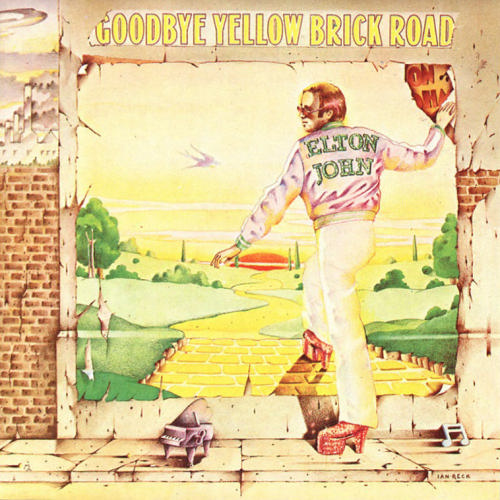 On Tuesday, Sir Elton John will begin his worldwide tour, “Farewell Yellow Brick Road.” It seems only fitting, then, to look back on his album “Goodbye Yellow Brick Road,” his best-selling album, in honor of the day it was released on in 1973.

With his seventh album, Elton John reached pop superstardom. “Goodbye Yellow Brick Road” is now considered perhaps his best and most-selling studio album. This is the album with “Bennie and the Jets,” “Candle in the Wind,” “Saturday Night’s All Right for Fighting” and of course, “Goodbye Yellow Brick Road.” His personality and stage presence are perhaps best reflected here, starting with the cover, which shows John entering the cinematic world of Oz wearing bell bottoms, shades, a shiny blazer and platform shoes. An expansive work of 17 tracks, John explores ballads, and the world of glamour and pop at the time, throughout the album.

The album may be best known for its collection of ballads with deep meaning for John. “Candle in the Wind” has now reached iconic proportions as a song not just about an idolization of Marilyn Monroe, but portraying the mystery and sorrow around celebrities who die young. When Princess Diana died in 1997, it took on a new meaning as John paid tribute to her memory.

The title track, too, is a classic example of John’s mastery of the pop ballad.

In the middle section of the album, from “I’ve Seen That Movie, Too” to “All the Girls Love Alice,” John’s ballads are able to flourish and reflect his sound better than ever. Some may seem on the questionable side these days, such as “Dirty Little Girl” (“How she do it, how she do it/I’m gonna tell the world, you’re a dirty little girl/Someone grab that bitch by the ears.”)

Personally, I’ve always liked the melody and composition of “Sweet Painted Lady” along with stronger lyrics (“My sweet painted lady, the one with no name/Many have used her, many still do/There’s a place in the world for a woman like you.”)

It should go without saying by this point that “Bennie and the Jets” is an enduring crowd-pleaser at any party. The song tells of the famed “Bennie and the Jets,” a fictional band, and is written in the key of G major. The song’s lyrics appear to be a satire on the music industry of the 1970s, fitting into well the cinematic theme of the album.

“Harmony” is also a standout example of John’s perspective on the industry. Although seeming at face value to be about his love for a friend who has returned, the song could also be applied to a relationship with music and to his career with music.

A taste of rock ‘n’ roll

And there are the next two tracks, “Your Sister Can’t Twist (But She Can Rock ‘n’ Roll)” and “Saturday Night’s Alright for Fighting.” John was clearly having some fun.

“Saturday Night’s Alright for Fighting” rocks more than expected from John and has energy to spare.

With his upcoming tour, Elton John looks to bid farewell to a long, fabulously iconic career as one of the best-selling pop stars of the latter 20th Century. “Goodbye Yellow Brick Road,” with its mature pop style and exploration of the industry as John had come to know it, is a perfect representation of the work that helped make his career what it has been. It remains an essential, rich source of reference for songwriters and pop artists.