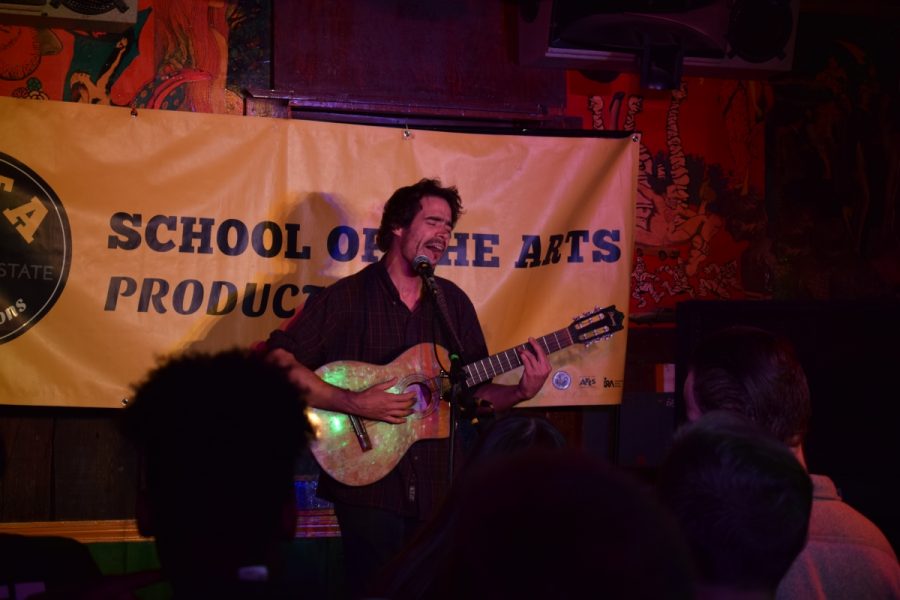 Passionate artists put their souls on the table with every performance. Photo credit: Daelin Wofford

It was live music galore at Madison Bear Garden Thursday, as the popular Chico hotspot hosted the School of Arts Productions (SOTA): Chico Unplugged in the final Winners Showcase.

Chico Unplugged is an event held every semester for three consecutive Thursdays. The previous two Thursdays were competition nights where musicians are able to sign up at 6 p.m. and play from 7 to 9.p.m. Winners are given the opportunity to record some of their music at Chico State’s state-of-the-art recording studio.

Chico Unplugged is going on its eighth year. The event started out at Woodstock’s Pizza but quickly grew out of the space and found its new home at Madison Bear Garden.

“It gives local musicians the chance to get their name out there and be able to record something in a studio and mastered by people that know how to do it, so it just gives good opportunities to the locals and students as well,” said Carly Neville, the general manager of SOTA.

On Thursday, the winner’s showcase allowed the seven winners from the previous Thursday nights to showcase their talent again.

Sophomore, a newly formed band with members Anthony Paneo, Haakon George, Dillon Novotny and Jared Kreuzberg, have been playing together for a little over a week and a half. This band is so new, in fact, that they decided to change their name to Sophomore a few minutes before the group went on. The group has a strong blues and jazz style and was formed out of the Performing Arts Center at Chico State.

“We have been playing with and around each other for the better part of a year now,” Novotny said.

The group members would practice every single night around midnight, and after a while, they collaborated and eventually formed a band and entered the competition.

Lenon David Padilla performed as a solo artist and reflected a bit on his performance.

“I think it’s alright,” Padilla said. “As an artist you’re never really satisfied with your work – I feel all artists are perfectionists so it’s hard to obtain above satisfactory.”

SOTA will be putting on more events in the future so stay tuned.