Chico State soccer handled things early in Sunday’s two score shutout. The Wildcats had revenge on their minds after losing to University of California, Santa Cruz exactly one year ago. Chico came out of the gate scoring two goals in the first half to put an end to their last non-conference opponent of the year.

The Wildcats entered this match after suffering a loss decided in the final minutes of action. Chico had a few extra days to prepare for Sunday’s matchup against UC Santa Cruz, and they used the time wisely.

They managed to to bounce back into the win column after the tough loss. Head coach Felipe Restrepo was impressed by his team’s response to today’s game.

“It’s part of what we talk about. What our response is going to be after a little adversity,” Restrepo said. “The whole week of training was really nice. They knew they had a chance to bounce back today.”

With fresh legs, the Wildcats sharply moved the ball around the field to dominate the shot count at 19. The first score came in the 17th minute of play after a beautifully delivered ball from Alex Fluitt. 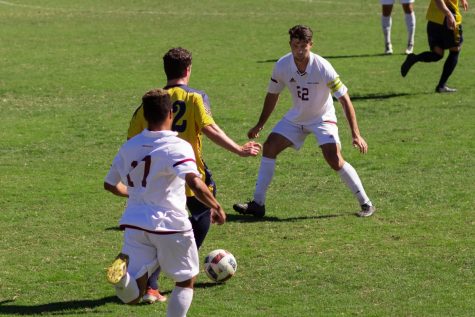 Making his run, Jeremiah Eugujie slipped past UC Santa Cruz’s keeper for the touch six yards out. Egujie’s efforts were rewarded with rest, as the scoring leader for the Wildcats did not see action for the rest of the match.

The offensive intensity was continuing through the first half as Samuel Licona put another goal in for Chico in the 41st minute. Andrew Hazzard succeeded in drawing a foul 30 yards outside of the goal in Banana Slug territory.

The play for the free kick was set up perfectly as Eddie Zecena knocked the ball off the right post. Samuel Licona cleaned up the shot while making his run, knocking one in from eight yards out. The key for the Chico State offense was pressure on Sunday.

“Keep pressing,” Licona said. “That was the plan throughout the whole game, and stay around the ball.”

Defensively, the Wildcats performed another shutout making it their 7th of the season. Damion Lewis had an easy load for the day, only playing in the first half coming up with one save. 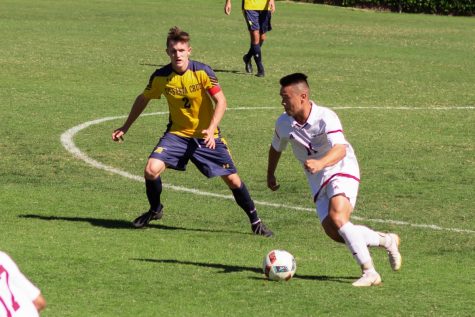 Luke Dennison came in to replace Lewis and lead the defense in the second half. Even with an immediate urgency to score from Santa Cruz, the backline matched the intensity, something that has been seen time and time again from the Wildcats. The scrappy play from the backline brought some animosity between the players.

“That unit of guys have been together for two and a half years,” Restrepo said. “Luke Dennison and Damion Lewis are two of the best keepers in the region, if not the country. That backline is pretty solid with our center backs. It’s been nice being able to rotate those guys. They’ve been awesome for us.”

Chico State advanced Sunday moving their record to 7-3-1 overall. Their next match is Friday, Oct. 12 verses Sonoma State at University stadium for a 4:30 p.m. start.