Chaos on the corner of 20th and MLK 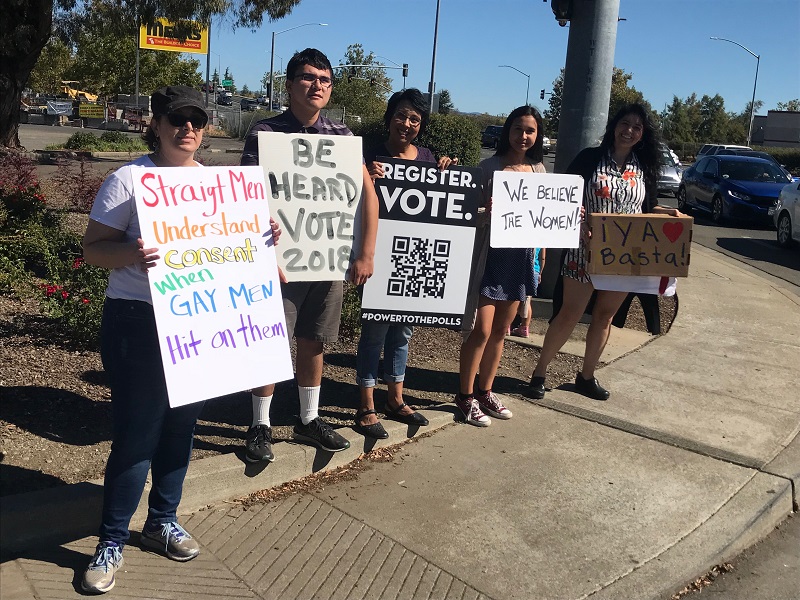 Community members gathered to show support for survivors of sexual assault, Sunday, and to remind everyone to register to vote this coming November. Photo credit: Dan Christian

Horns blared and tires squealed through the busy intersection of Martin Luther King Jr. parkway and East 20th street, as Sunday drivers honked and shouted to show their support for survivors of sexual assault.

This wasn’t the first time Mobilize Chico has taken to the streets, and it won’t be the last. Committee members have lead demonstrations on the first Sunday of every month—rain or shine—for the better part of two years now. The Mobilize Chico website states the organization is, “dedicated to the defense of human rights and human dignity and to the preservation of democratic values.”

Usually, the demonstrators have their hands filled with signs covered in messages of hope and encouragement to remind everyone that they are welcome here in Chico, especially those who have been marginalized or disparaged against.

However, the recent controversy surrounding the confirmation of Justice Brett Kavanaugh to the Supreme Court has inspired the group to channel their message to a more specific cause: showing support for survivors of sexual assault.

Unfortunately, sexual assault is serious issue that affects people from all walks of life regardless of their age, color, creed, gender, or sexual orientation.

“Everybody has either been the subject of sexual assault or has had their ass grabbed somewhere or has been cat called,” said Liz Michelena. “Everybody that I know has a story to tell.”

Michelena is a strong supporter of Mobilize Chico but had never made it out to any of the previous demonstrations. However, after hearing the Senate confirmed Justice Kavanaugh, she felt compelled to take action in any way she could.

For more information about Mobilize Chico visit their website.