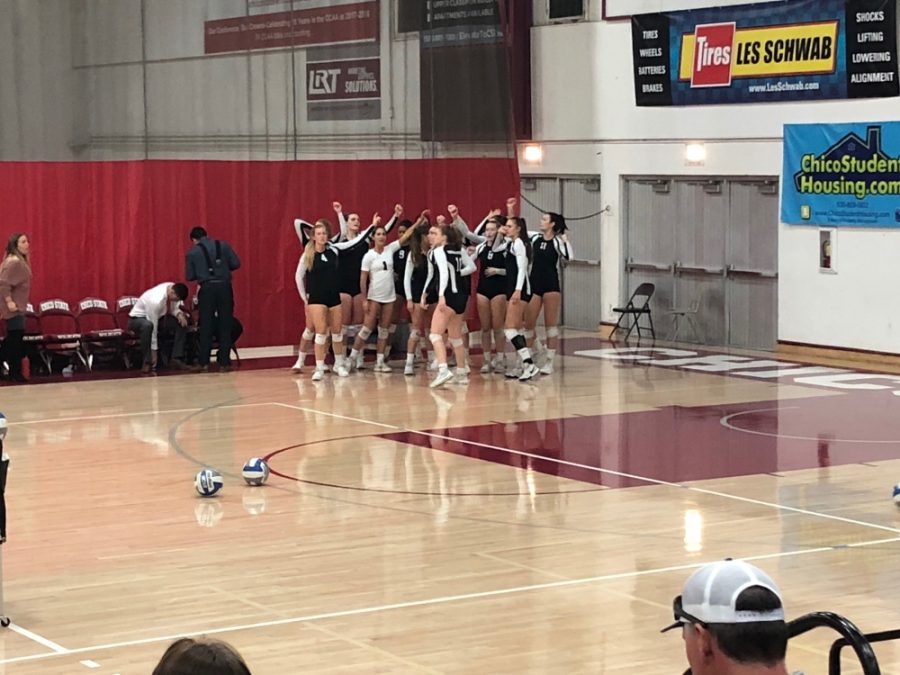 Chico State gets ready to begin their game against UCSD on Saturday. Photo credit: Connor Mcpherson

After losing four games in a row, Chico State volleyball played incredibly hard to eke out a 3-2 victory, including a come-from-behind win after being down two sets to one. Thanks to 15 kills from Bekah Boyle and 12 from Kennedy Rice, Chico State was able to win their first match with interim coach David Irving.

“I’ve been saying something that the track and field coach has been sharing with us, and that him and Cody (Hein) love to say all the time, so our mantra this week has been ‘sprint to the finish line,’” Irving said about the victory. “We gotta ride out this victory and work this week, and take our momentum into this weekend.”

Chico State started off hot coming into set one, winning by nine points (25-16), and maintaining the lead for the entire set. The next two sets the Wildcat’s dropped (25-19, 25-22), including a game three that came down to the wire.

With their backs against the walls, the Wildcat’s pulled out a must win set four (25-22), leading to an all-or-nothing set five. Chico State started slow, giving University of California, San Diego a quick 7-4 lead, but then turned it around, scoring five straight points.

For audience members who didn’t follow Chico volleyball, it must’ve felt like this was their championship. Chico was giving their all on every play, never gave up on one. Kennedy Rice even dove over the scorers table in a successful attempt to keep the ball in play. The final score was 15-12, and Chico State really earned this victory.

“This is the most fight that I’ve seen out of this team in a while and I think it was awesome,” Boyle said. “Everybody was on the same page, everybody was in it for the long haul, everybody wanted to go to five, and I could look into my teammate’s eyes and tell that every single one of them wanted this game so badly. We played for and with each other and I think that’s the key.”

“We prepared by conditioning well, had lots of positivity, just being together as a team, because we’re a family and today we finally came together,” Rice said. “We have to remember how this feels… we’re fighting for each other and our coach and we just want to pull it all the way.”

Looking forward on the schedule, Chico State will head out to Los Angeles, to take on an incredibly tough one loss CSU LA team. Chico now has a 5-8 record in conference, but is 12-9 overall. Their game against Los Angeles will be on Friday, October 19.

“We need to carry the confidence from this game over,” Boyle said. “I think there were a lot of things that went right for us tonight and I think our confidence, our energy and our emotional game really picked up and that really made the difference for us.”