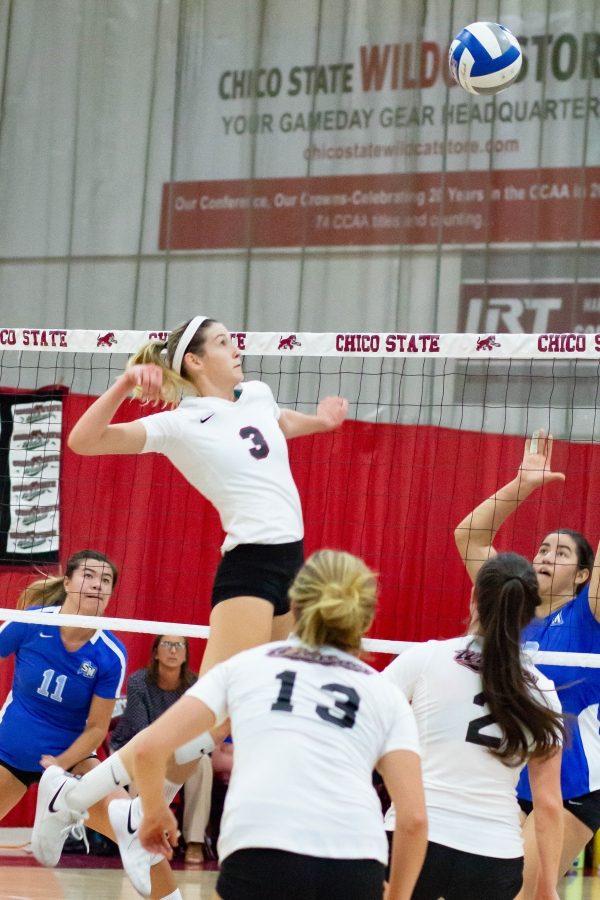 It’s the same old story for the Wildcat’s volleyball team, they look fantastic one night and win a scrappy five sets, and then they come back the next game and lose in three sets. A roller-coaster of a season with too few ups to make the constant downs not feel anything but normal at this point.

The Wildcats came into University Gym against Cal State Los Angeles, looking to build off a victory that broke a four-game losing streak. Instead the final score was a quick sweep of 25-19, 25-21, 25-19. Dropping Chico State to 12-10 on the season and 5-9 in the California Collegiate Athletic Association North Division.

With four games left this season, Chico State remains in fifth place in the North Division, half a game behind 4th place San Francisco State. They are by no means out of taking that fourth and final playoff spot, they just have to do their part and win out the rest of the way, and not let other teams decide their fate.

The Wildcats were never blown out in any set on Friday; they have been consistent all season in that they are always in position to win a set. However, tonight the Wildcats were held to a .184 hitting percentage and no Wildcat had more than 8 kills, Kennedy Rice being the only Wildcat with 8 kills.

Other notable performances came from Hailey Carter with 18 assists, Kim Wright along with Makaela Keeve added five kills each and Brooke Fogle had 11 digs. The talent is very much there for the Wildcats to get the season back on track, but with four games left the time is now for them to do so.

Students and fans can follow the game online with Live Stats and live streaming video, all available through the Chico State athletic website.