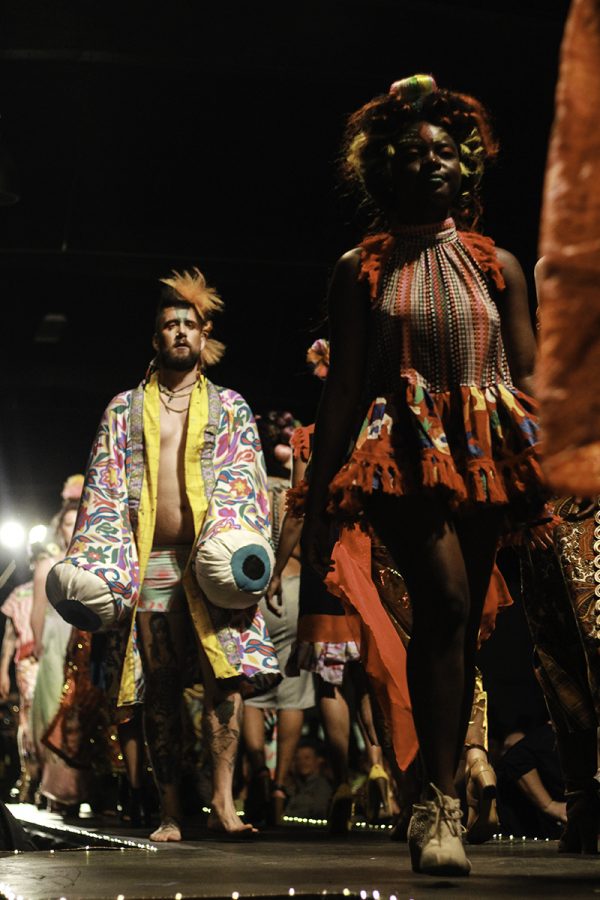 All eyes were on the catwalk as Chikoko put on their annual fashion show event. The event showcases the design work of four women – Nel Adams, Christina Seashore, Sara Rose Bonnetti and Muir Huges. Each year the show has a theme, which this year was “Evoke – An Experimental Fashion Event”.

“We play a lot of word-associating games together in a meeting or we come upon a word that will feel good to us, and we decided on a theme and it sort of manifests from the different places that we’re in,” said Christina Seashore about the theming process for each year’s show.

The fashion reflected the theme. The designers wanted to take hold of a person’s senses and the clothing in the show reflected it.

“(Like with) eyeballs and hands with tounges and teeth and fur sequences, fringe flowing, full coverage, barely covered,” Seashore said.

Many people were involved with the show from the light to the musical arrangements, as well as hair and makeup. All of the models had colorful hairstyles.

Some of what inspired Nel Adams wasn’t just found in the theme of the show. Like many other artists, nature was a big inspiration for some of the pieces in the show.

“I was looking at books on nature, all these fall colors and they were all in neon,” said Adams.

“And I was like oh my god, I really just want to get a whole bunch of neon brick and put it on.”

For the models in the show, many eyes were upon them as they walked down the runway. David “Dragon Boy” Sutherland explained how it felt to essentially be walking art.

“It’s super creative and kind of like a cog in like this super amazing creative machine that these four women have been creating for a while,” Sutherland said.

“(With) all the energy they’ve been putting into making their outfits, it feels like you’re a vessel for that creativity.”

The actual show was exactly what its namesake suggested. It evoked every sense imaginable, from dresses that were more simple, yet had a little flair, to the wild and out-there pieces that had ears popping out of the sides.

Attendee, Alice Burke, described the event like she was, “at the Burning Man festival,” even though she had never attended the actual festival.

The show concluded with a rousing applause from the crowd. Many of the garments shown on the catwalk were available after the show for people to purchase.