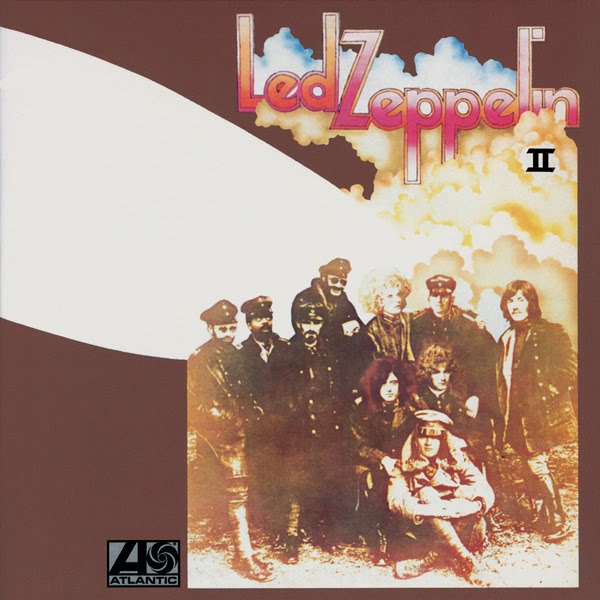 By 1970, Led Zeppelin was redefining rock and roll. "Led Zeppelin II" was their second in a string of masterpiece albums. Image from Atlantic Records.

In the ’70s, nobody could touch Led Zeppelin once they took off. After the release of “Led Zeppelin” earlier that year, this album proved that the band was ascending to new heights for rock. Now widely considered to be a milestone for heavy metal, the album proved that the combined talents of Robert Plant, Jimmy Page, John Paul Jones and Robert Bonham were hardly a flash in the pan. “Led Zeppelin II” has been cited by many critics and fans as one of the heights of achievement for not just the band, but for the rock genre.

To even attempt to analyze such an iconic album, it is necessary to look at what happened after the first album proved an international success. It may seem the norm now but, when this album was released, songs like “Whole Lotta Love,” that were based around guitar riffs, not vocal choruses. were unusual. This album’s string of such songs helped redefine rock songwriting.

This is also the album that has “Heartbreaker” and “Ramble On.” The former is often played as a double “Living, Loving Woman,” and exemplifies the guitar riff base that characterized the band’s earlier work and set the blueprint for many future rock bands.

“Ramble On” has lyrics influenced by the “Lord of the Rings” trilogy (“Twas in the darkest depths of Mordor/ I met a girl so fair/ but Gollum and the evil one/crept up and slipped away with her, her, her yeah”), with rich acoustic work from Jimmy Page to accentuate Robert Plant’s alternating of teasing, mellow vocals with a howling chorus. It’s an addicting song with violin-like solos by Page.

Inspired by the blues

“The Lemon Song,” “Moby Dick” and “Bring It On Home” are examples of songs that use a blues hook to define the track. The band would fully realize this styling on their next album, but here there are delicious interplays of blues rock in the compositions of “Lemon Song” and in the harmonica and vocal work of “Bring It On Home” in particular.

Meanwhile, the funk influence in the bass playing by John Paul Jones on “Lemon Song” has to be enjoyed several times.

“What Is and What Should Never Be” is one of the most experimental songs on the album. With an unusual descending riff, the song’s psychedelic style is enhanced by the release of the vocals on top of the main riffs. It seems to start as a restrained blues ballad, but keeps releasing tension with the chorus and haunting vocals straining after the first guitar, but by the middle portion, with the guitars answering one another, all tension is released into a gorgeous finale.

Experimenting with the blues in “Bring It On Home” and with the use of other instruments, such as a Hammond organ meeting the acoustic guitar in “Thank You,” were further evidence of the band’s rapidly developing sense of style and songwriting complexity. This track is purely alluring with an otherworldly touch thanks to Plant’s voice mixing effortlessly with the organ.

There are some albums which can shape your taste in music forever after hearing them. “Led Zeppelin II” is one such album – the band took the innovations and high-quality technique of the previous album and created a record that begs to be heard over and over at different points in life.

Don’t be fooled for a minute that this is “dad rock”. By the end of 1969, with this and their first masterwork “Led Zeppelin” under their belt, the band was on their way to taking over the world of rock. Almost 50 years later, this album still proves why.