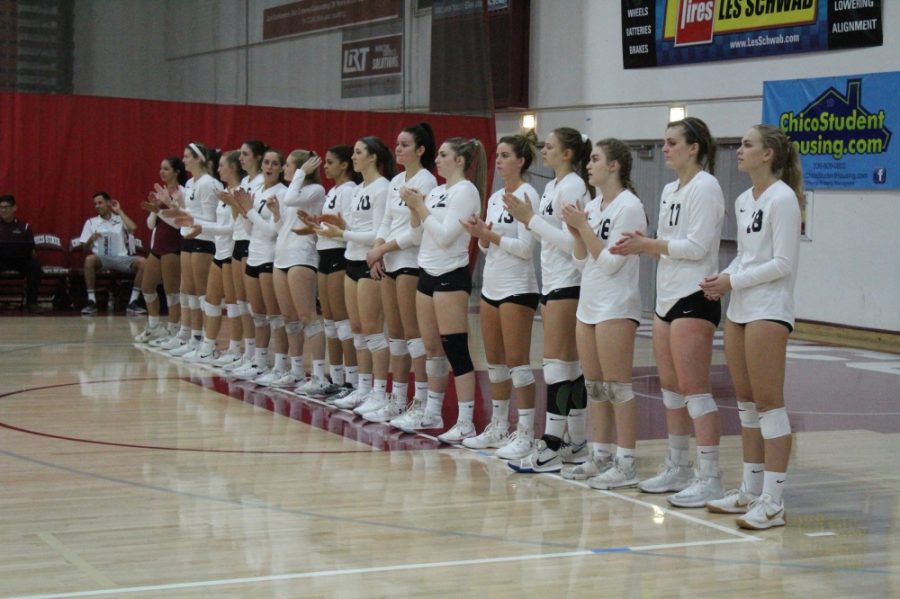 The Chico State Wildcats line up before the game against Sonoma State on Friday. Photo credit: Ricardo Tovar

The rollercoaster of a season that is Chico State volleyball hit a peak at just the right time Friday night. With three games left in the season, and with Chico State being in fifth place and fighting for one of the four California Collegiate Athletic Association North playoff spots, this 25-2, 17-25, 25-19, 25-20 victory over Sonoma State was a season saver.

The Wildcats came in having lost nine out of 10 previous encounters with the Seawolves. This victory puts Chico State at 13-11 for the season and 6-10 in the conference. A half-game back of fourth place San Francisco State and a game back of third place Stanislaus State, whom the Wildcats play on Nov. 3 in the last game of the regular season.

“From here on out games are must wins,” Middle hitter Makaela Keeve said. “It’s also a little bit extra pressure; we’d like to think of Sonoma as a rivalry match. We were disappointed we lost to them the first time, so this was kind of our little redemption match.”

This game was won by several players having double-digit kills, it was a real team effort. Keeve led the Wildcats with 14 kills while adding an additional nine blocks. Kim Wright had 12 kills of her own and Bekah Boyle and Kelley Jacome helped out with 11 kills each.

Other key contributors were Hailey Carter who had 48 assists and Brooke Fogel who had 20 digs. It cannot be stressed enough, having lost eight of their last 11 matches, how much this win means this late in the season. Especially in four sets that they looked in control of the entire time.

“I think we were paying attention and we were really fired up before this game,” Freshman setter Carter said. “We were already expecting some of the things that they were doing. We already knew what they run, so I think that helped us. I think this game we just played with our heart.”

With two games left in the season each one will be a must win for Chico State to best assure themselves a playoff spot. Their next game is their last home regular season game on Saturday, Oct. 27 against Humboldt State, who the Wildcats defeated earlier this season.