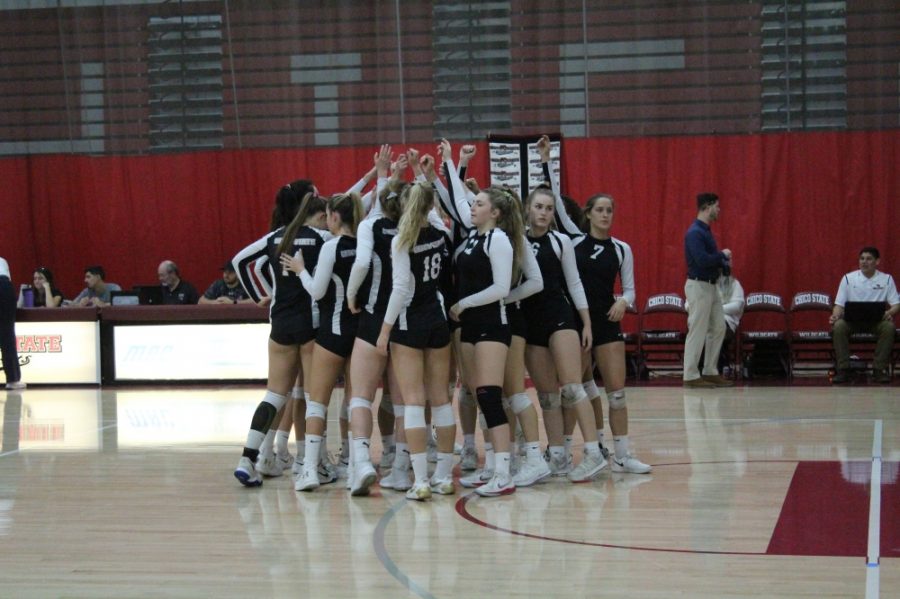 Wildcats pump themselves up for their match against Humboldt State on Saturday. Photo credit: Ricardo Tovar

Chico State women’s volleyball would have to run the table for any hope of a playoff-berth coming into the weekend, and through the season’s last home-stand they have done just that. Chico would win on Saturday in four sets against the last place team in the conference, Humboldt State, with a final score of 24-26, 25-13, 25-21, 25-14.

It’s a little later than anyone would have hoped for this team to get it together, but if Saturday is a metaphor for Chico State volleyball’s season, they start slow but always finish with their best effort. Chico State began the first set 4-0 and eventually squandered an 18-16 lead to lose 24-26 in the first set. After that the Wildcats never trailed in a set again.

Chico State looked downright dominate after the second set and held the Lumberjacks to a pedestrian .049 shooting percentage. Notable players included Bekah Boyle with 14 kills, Kennedy Rice with 8 kills of her own, Brooke Fogel with 21 digs and freshman Hailey Carter with 40 assists.

“These last two nights have felt really good,” Boyle said. “I feel like we’re feeling the finality of the season. We came out a little complacent. I know that Humboldt hasn’t had a conference win yet. I think we came in with that in our heads, but after that first set people really picked it up and were hungry to win and that was awesome to see out of my teammates.”

A special moment of the game came when Kim Wright channelled her inner Curt Schilling, had her own version of the bloody-sock game. A bloody-nose suffered in the third set was no problem for her as she had 12 kills, five digs, two blocked solos, seven block assists and never missed a set.

“It’s nice to end on a win at our last home game,” Wright said. “It’s a small chance we can make it to the playoffs and we knew that going into this weekend. Now it’s all up to the Stanislaus game next weekend.”

On Saturday, Nov. 3 the Wildcats will play their last game of the regular season at Stanislaus State at 7p.m. With the possibility of a playoff-berth on the line it will be another critical and exciting game.