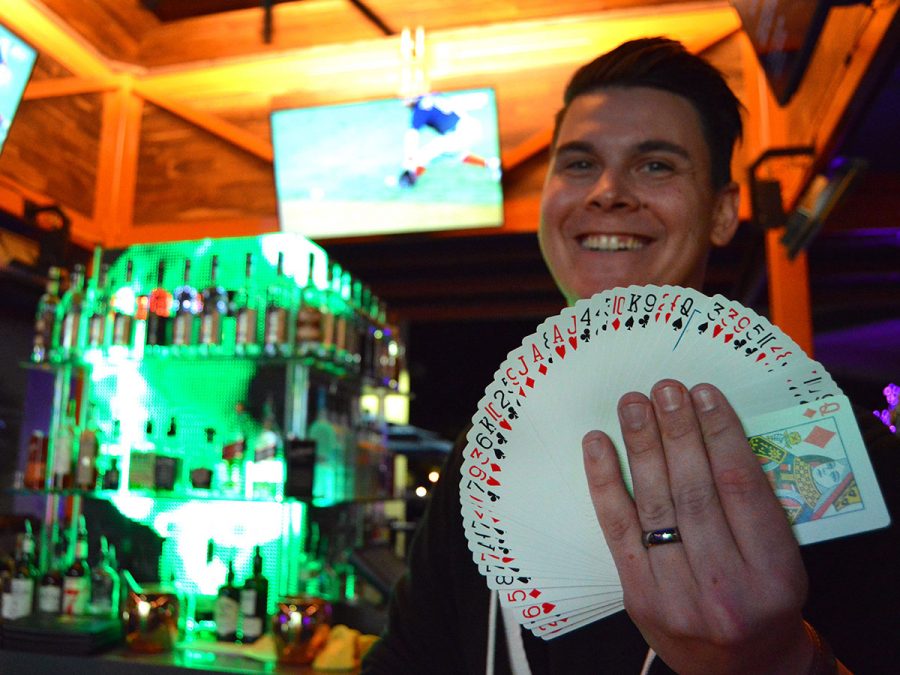 Magic is a longstanding tradition in Dean Waters' family. He has been practicing the art form since he was 18-years-old. Photo credit: Olyvia Simpson

Chico is famous for having a vibrant nightlife, one that entices and has a reach nationwide. The bar scene is a watering hole for those thirsty for social engagement but many don’t have a formula that differs from one another. The Pour House in North Valley Plaza has a man, not a formula – Dean Waters, magician and bartender extraordinaire.

Can you give us some background about yourself?

I’m from right outside of Savannah, Georgia and that’s where I started doing magic and bartending, about 15 years ago. I left for North Carolina and started a backpacking trip where I walked from Rawley, North Carolina, to Albuquerque, New Mexico, over the course of nine months. I paid for that trip by stopping outside of bars in the downtown areas of bigger cities. I performed magic for tip money – that’s how I survived.

What inspired you to do magic?

My grandfather was a magician so I grew up, during the summers, following him on his tour. I’d be backstage and help him set up and break down, he did a lot of big stage illusions, and did some closeup stuff on the side. I fell in love with cards, coins and small objects. Things that can be done right in front of you with normal objects.

How did you decide to start implementing magic and bartending?

There’s a magician named Doc Eason at John Denver’s Magic Bar in Colorado and he inspired me to do bar magic. It’s something I’ve done since I was 18 or 19 years old. Working in bars and doing tricks, it’s a different take on the bar atmosphere, so (in) any bars I’ve worked at, from the East to the West coast, I’ve always done magic.

What is the best part of the magic for you?

The most important is the awe and wonder that you can instill in people. Sure you can’t do that every single time, but they do have that moment of awe, that moment of wonder, (wanting) to see more. That’s what motivates me to keep going with it.

What is the difference between performing for an audience that is intoxicated versus sober?

It is more unique with an inebriated audience. The things I do are going to be much more visual and snappy and less cerebral. With a more sober audience, I go into things that require more thinking, much more expressive pieces. When they’re drunk, I’m going to make a coin disappear and I’m going to pull it from behind their ear– for the most part. It’s very visual, very quick and easy to understand.

What is your goal with magic?

Ricardo Tovar and Olyvia Simpson can be reached at [email protected] or @rtovarg13 or @OSimpson15 on Twitter.