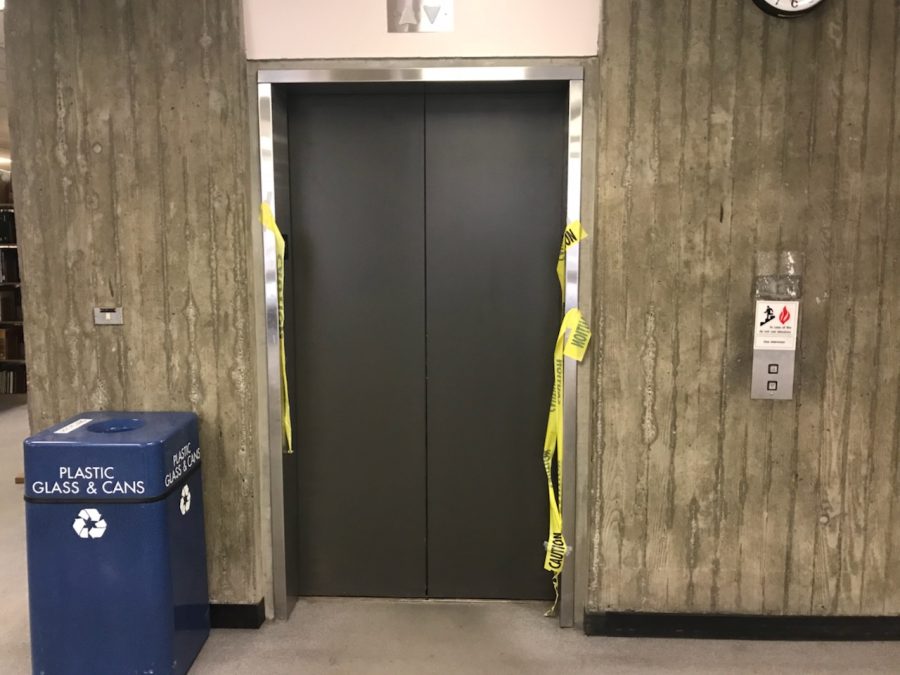 One of the elevator malfunctions occurred on Oct. 1 on the third floor of the Meriam Library. Photo credit: Dan Christian

Warning: While the following story correctly represents the reports received concerning the elevators on campus, the details of those reports have been spook-i-fied for entertainment purposes.

It started with a phone call.

A few days later there was another and then yet another. It seemed as if though every couple of days one of the elevators would decide it would be fun to make a prank call. The phone would ring and, when answered, the line was open, but there was no one on the other end.

All that could be heard was the sound of the doors opening and closing. Officers inspected the elevators, but were unable to locate any problems. The front desk insisted the elevators were empty. There was no one around.

Then, came the malfunctions.

The first time just seemed like a freak occurrence, elevators have been known to get stuck from time to time. Thankfully, the person was only trapped momentarily and they were able to free themselves before police even arrived.

A week passed without incident. No trapped students. Not even a single phone call. Then it happened again. The elevators had gotten bored with prank phone calls.

Every other day one of the elevators would gobble up another group of students and refuse to spit them out. Some found their own way out, while others had to wait.

Occasionally, several days would pass without incident. Then, without warning, it would start up all over again. In this last week, there was a total of three malfunctions in two days. Two of those three instances resulted in people trapped inside.

When asked for comment, the university’s Facilities Management & Services Office stated that they were aware of the malfunctions and that these things are part of normal operation. There was no mention of whether or not the expired inspection certificates were still hanging in all the elevators related in any way.

“We are aware of our elevator malfunctions and apologize to those effected by it,” Kampmann wrote. “When a malfunction arises, we address the issue according to our processes. We are always looking to improve these processes as we understand that these instances should, and typically do, get rectified immediately.”

Things seem peaceful for the moment but there is no telling when one of the elevators will strike again. With Halloween so close at hand, this may simply be the calm before the storm.