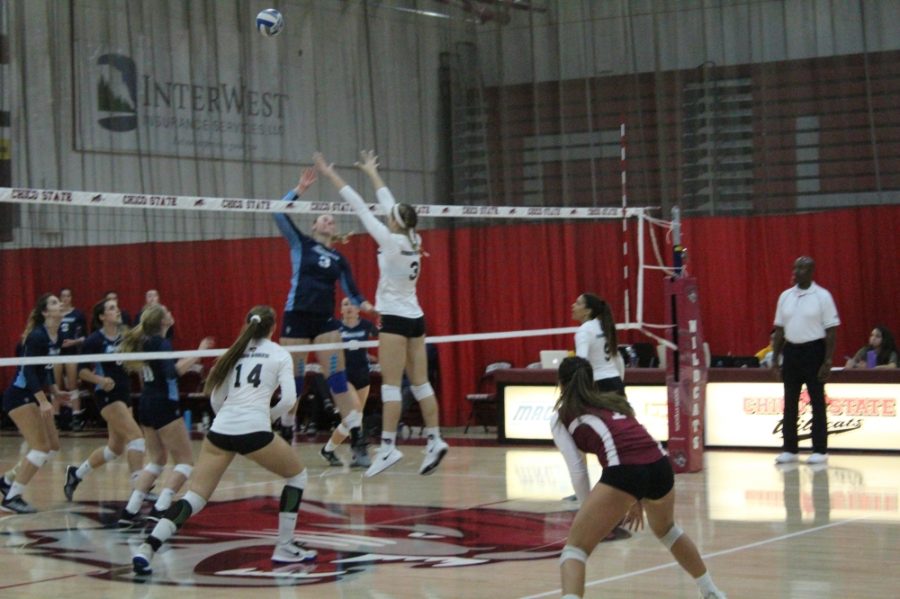 The Chico State volleyball team has been through a heck of a season.

Starting off conference play with a six set losing streak at the beginning of the season then finally getting their first conference win of the season against Stanislaus State mid-September, Chico State went on to create a three game winning streak.

But right after that they started to fluctuate, losing in three sets one night then redeeming themselves with a five set win the next night. The team was about ready to give up as they faced a very lengthy losing streak and were slowly watching the season come to end.

They somehow managed to keep their playoff hopes alive in their last two home games beating out Sonoma and Humboldt State. They were ready to bring that winning energy onto the road and looked to repeat history with a win against Stanislaus State.

In the first set the Wildcats were making their presence known on the court. But this wasn’t enough and the Warriors kept the lead for most of the set. It was a constant tug between both teams never reaching more than a four point difference. Stanislaus gained momentum in their execution of their last three points and finished the set 25-23.

This discouraged Chico State and the low energy was noticed in the second set. They ranged from six to eight point differences the whole set. Stanislaus State blew Chico out of the water finishing the set 17-25.

“After the second set I told them ‘Hey girls we got a lot of volleyball left to play let’s go out and play it,’” Interim head coach David Irving said.

The Wildcats returned the favor in the third set not ready to give up on their dreams of making the playoffs.

Chico State not only stayed in the game but completely dominated over Stanislaus. They started with a four point lead that soon turned into a seven point lead with the help of Jacome, Bekah Boyle, Kim Wright and Kennedy Rice delivering kill after kill.

The Warriors stood no chance of redemption and the Wildcats took the set 25-14.

This carried onto the fourth set with an early 4-1 lead. Stanislaus wanted the game to end and kept on the Wildcats tail up until the middle of the set. Chico was able to break away steadily increasing the lead to a five point difference.

The Warriors closed the gap at 18-20 but that was the closest they ever got to the lead. Following a couple of service errors and two kills by Makaela Keeve all the Wildcats needed was one point to destroy the huge advantage Stanislaus had.

Wright did just that by ending the set with a kill assisted by Hailey Carter, leaving the final score 25-20.

“We were a full team, a full unit and I think that is something we did that Stanislaus wasn’t quite able to,” Irving said.

The crowd at this point was on their feet shocked at the comeback that the Wildcats were very familiar with at this point in the season. They were more confident than ever and ready to take the win, but the last set was a long battle.

There was no clear leader at the beginning of the last set. Stanislaus put themselves on the scoreboard 2-0, but Chico followed quickly and tied the game up. There was a total of five ties in this set all before either team could reach their tenth point of the set.

With the score 9-9, the Warriors were looking to shutdown the Wildcats unbelievable comeback. A key player of the night for Stanislaus, Ramey Gardner, was a threat all night and showed why by sending Chico State packing with a three kill finish in the last set and ending the game 15-10.

“I’m incredibly proud of the way they turned it around and played,” Irving said.

As a team Chico State put up a fight and every minute on the court every individual proved their skill. Boyle never failing to perform ended the night with 16 kills, ending the season with 324 kills. Carter with an impressive 32 assists at the end of the night, ending her season at 188 assists. While key player Brooke Fogel ended the night with 16 digs, leaving her at 429 digs this season.

“With pressure, diamonds are made,” Irving said. “So I think we faced a lot of pressure this year and we ended with a tough loss and that is going to motivate us moving forward.”

With no seniors on the squad, during their off-season the team is looking to focus on coming back strong for the 2019 season.