Nothing’s better than chamber music and wine. Four musicians from the North State Symphony played at Wine Time, a local family-owned and operated small-plate restaurant, Wednesday. The quartet played a variety of music by Mozart.

“We played a bunch of quartets by Mozart,” said Elizabeth Quiavey, the executive director of the North State Symphony. “Most were string quartet so even though we had a flute she played the first violin part.”

The North State Symphony now plays chamber music every month at Wine Time on the last Wednesday of every month. One of the things the quartet wanted to experiment with was taking classical music out of the concert hall and into common areas around town. Wine Time was the perfect venue for the type of music being played. 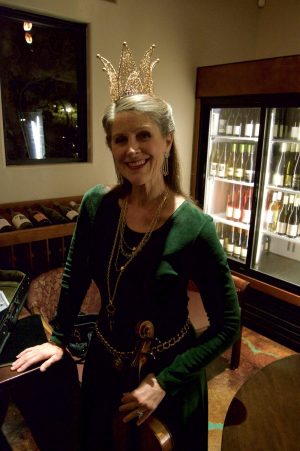 Nancy Roby, a solist for the North State Symphony.

The chamber music played at the restaurant has been different every time. Brass quintets and string quartets have played, but this recent performance was completely improvised – the quartet had had no prior rehearsal.

“We opened up the book and said this one looks pretty playable, and we don’t know how it goes but we’re going to find out,” said Nancy Roby. “It (was) a little bit nerve-racking. But I know the people I’m playing with and it’s fun playing music together.”

She said because the music was “really recognizable,” she felt that it would be very crowd-pleasing.

In their next concert on Nov. 10 and 11, the NSS Youth Philharmonic orchestra will join the symphony and play alongside the professionals, according to Quiavey.

Solo violinist Timothy Chooi, who has worked with the music director before, will be taking the stage alongside the symphony. Chooi recently won an international violin competition where he won a $50,000-pound prize.

Chamber music will continue to play at this restaurant on the last Wednesday of every month. Anyone interested in playing with the North State Symphony during the chamber music hour atWine Time is encouraged to contact them through northstatesymphony.org.

The symphony will play continue their four-concert series on Nov. 11 at Laxson Auditorium.