Spirits were high in Chico for Dia de los Muertos 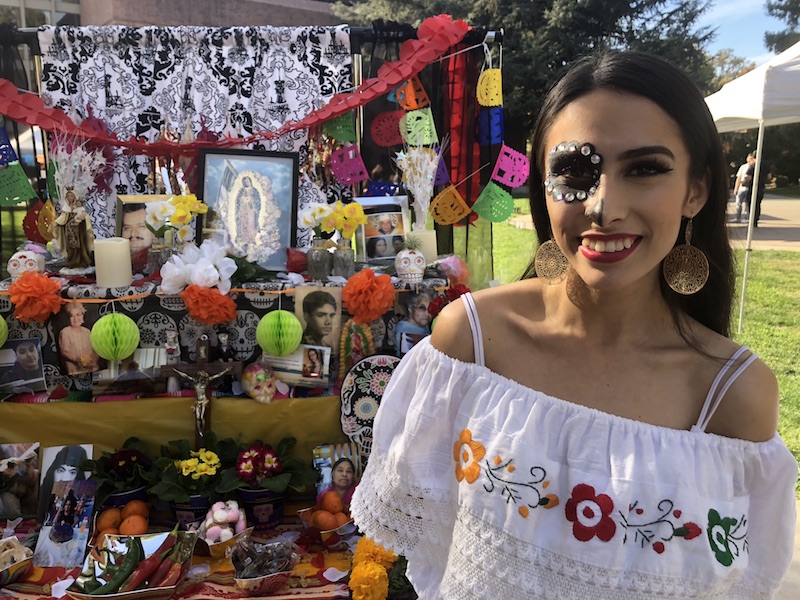 You don’t need to be told when people are celebrating Dia de los Muertos. You don’t need to see it either, you can smell it. You can hear it. It’s a warm feeling that envelops you and leaves you feeling appreciative and grateful. Chicoween has become notorious, but this is the Fall holiday that’s worth experiencing.

Dia de los Muertos is a holiday centered around celebrating the lives of the dead. While it does have a religious history, one does not need to believe in the concept of spirits and an afterlife in order to celebrate. It’s not about mourning the dead, but being happy and thankful for the lives that they lived.

Gerardo Mireles, the advisor for M.E.Ch.A., has been promoting the celebration of the holiday on campus for a few years now.

“The concept of remembering those who have passed away, that’s something that I find is a really good thing for all of us,” said Mireles. “Not to say ‘we don’t talk about dead people’ or ‘I don’t want to talk about him because it’s too painful.’ To celebrate the lives of those people is what motivates me.”

Mireles was an officer in M.E.Ch.A. in the 90s when he attended Chico State. “We wanted to promote culture, awareness of the culture that we represent and also the political issues that are affecting minorities,” Mireles said.

Even those that have immigrated here from Mexico don’t typically celebrate Dia de los Muertos. It has largely been replaced by Halloween, especially for those who were born in the United States. Some of the students who were running booths during the event on campus have personal experience with this feeling of disconnection.

“It’s become a social norm to not celebrate it, especially among Chicano youth,” Yajaira Martin said, “Our parents are from a different country, so it’s gonna be much more popular of an event over there, whereas here, we’re a minority, therefore we don’t always feel that we have a safe space to do that.”

A member of M.E.Ch.A., Esmeralda Aguilar, commented on the significance of celebration over mourning. “It’ll always be a sad thing, but they need their moment,” she said.

“I think it has to do with whether people have access to celebrate the holiday. If there’s not enough people to continue those traditions, they start to disappear from the family.”, Mireles said.

The Chico Arts Center also held an art gallery that featured work that fit the various motifs of the holiday. The gallery was packed and the fascination on people’s faces as they browsed the art was instantly recognizable. Skeletons and skulls are a symbol commonly seen during the holiday. The mystique and power that these symbols have can be felt by anyone. Death is not seen as an end and the mystery surrounding it is a phenomenon that carries universal interest.

Maria Shahid, a Spanish instructor at Butte College, was one of the hosts of the art gallery. She explained the meanings behind the various objects, plants and foods that are used as decoration on the altars of the dead. Most of them are used to attract spirits of loved ones by using scents like coffee and bread in order remind them of comforting places, like the kitchen.

It’s an idea that goes hand in hand with the holiday and making sure that loved ones are at peace and comfortable with death. The living celebrate the lives of the deceased and the dead enjoy the comforts of the past.

Seeing the Chico community come together for this event is something that everyone should experience, especially if they’ve become sick of Chicoween. It’s a holiday that doesn’t require religious beliefs to celebrate and it’s something that could do anyone a lot of good when trying to grieve. The various organizations on campus have helped turn this into what it is today and it’s only going to get bigger and better.

“I’m excited to see what future years would look like for Dia de los Muertos,” Aguilar said. “Everything is going so right.”