Josh Fox performs monologue on how “The Truth Has Changed” 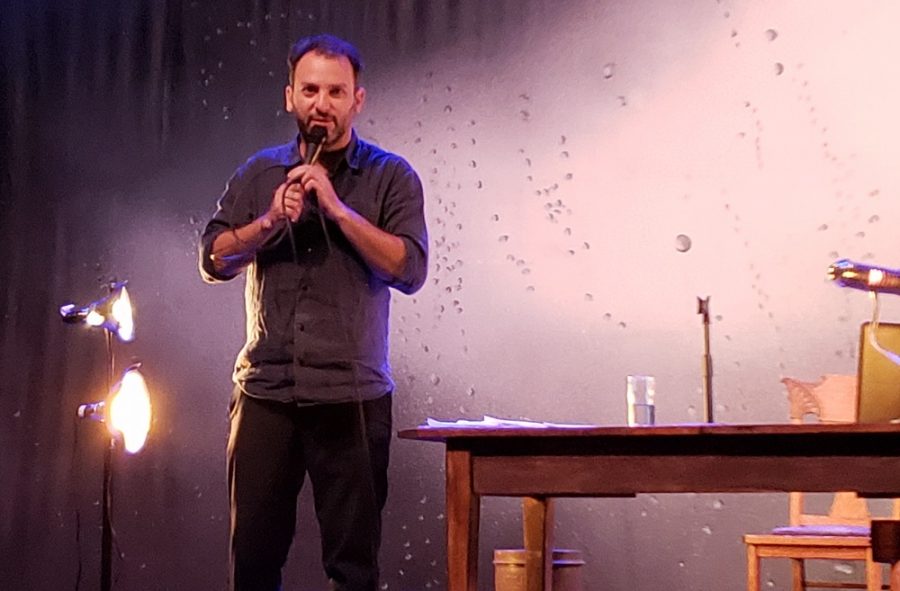 Josh Fox speaking at the El Rey, Saturday, thanking the crowd for attending after he finished his performance. Photography and phones in general were not allowed during the main performance. Photo credit: Josh Cozine

Fox earned an academy award nomination for his 2010 documentary film “Gasland,” a film in which he toured the country and uncovered the dangers of hydraulic fracturing, or “fracking.” He’s continued to tour the country, warning people of the dangers and making more documentaries.

His latest project, “The Truth Has Changed,” is slightly different. It’s a solo monologue, released as a book, and soon to be made into a film.

Fox was invited by Chico 350 and performed the piece to a small crowd, including candidates for the upcoming midterm election Sonia Aery, Alex Brown and Phil Kim. Students were allowed in for free with a college ID.

Fox explained the inspiration for the tour came from his life experiences, but more so from a question asked by a student at a college where he was presenting “Gasland.”

“How do we know what’s true?” he said she asked. He opened his mouth to respond, but realized he couldn’t, and the idea for “The Truth Has Changed” began developing.

In the spoken word piece, Fox started by talking about his experiences in New York City working to assist first responders following the destruction of the World Trade Center. Fox worked as a gardener at the building complex, but thankfully not that day.

As ash rained down the night of the fateful event, he and some friends from a theater group put on respirators and went to collect food donations for first responders.

“We dressed like it was the apocalypse,” Fox said.

His group was putting on a production of an apocalyptic themed play and had purchased the respirators for the play. Despite being told by authorities the ash was safe to breathe, the burning in the back of his throat told him otherwise. Friends of his without respirators later died of lung cancer.

Fox then went through his experiences of touring the country in the making of “Gasland,” discovering and documenting the dangers of fracking, after oil companies told people the process presented no dangers to human health. He documented cases of illnesses across the nation next to fracking sites.

Once the documentary started gaining fame, it became a target of propaganda according to Fox. People began calling it fake, or argued some clips in the movie, like lighting water on fire, were faked. Eventually, he began receiving death threats.

He then moved onto the newer age of changing truths.

“Weaponized data is here to stay, and it’s coming for you,” Fox said.

According to Fox, data mining, psychometrics and targeting of information to specific demographics is changing the world as we know it. Digital information, targeted messages to specific groups, especially during the 2016 election, swinged it to the right.

Once his piece finished, local experts and candidates took stage and spoke on what people could do to take action and change these issues. The majority strongly agreed that getting corporate money out of politics is the most important change to be made.

Josh Fox then summed up his monologue for The Orion after a quick book signing.

His book can be purchased online, and a feature film of the monologue is now in the editing stages.