Sneakers glimmer throughout the NBA

Jaylen Brown of the Boston Celtics attempts a dunk in the "2004 All-Star Game" T Mac 3's in the home opener. Photo by Jesse D. Garrabrant/NBAE, image from Getty Images

What’s worn on a player’s feet is the premier form of self expression in the game of basketball. The NBA removed all color restrictions on footwear in this year’s off-season, giving players the opportunity to match energetic sneakers with the vibrancy of Nike apparel. Ever since Nike scored Michael Jordan in 1985, the company birthed a major line of consumer culture, made famous by NBA athletes.

The players sport footwear that tell a story by collaborating with designers, having shoes custom painted or finding shoes that are most suitable for their performance. International and lifestyle brands are giving their athletes an opportunity to take a less traditional route, instead of signing with billion dollar corporations that do not recognize their athletes as much.

Kyrie Irving debuted his new signature sneaker, in collaboration with a new designer by the name of Taco on Nov. 1. Taco is the set DJ for Tyler the Creator and is famous simply for his lifestyle. The Kyrie 5 colorway is based on the inspiration of being yourself.

Lebron wearing the Nike LeBron 16 in a yellow and black colorway against the Timberwolves. Photo by David Sherman/NBAE, image from Getty Images

LeBron James’ line has a history of hefty mid tops, suitable for his 6-foot-8-inch, 250 pound frame. LeBron surprisingly made the move to low tops for his 16th signature model with Nike. He brought out a new flashy colorway to match the purple and gold. 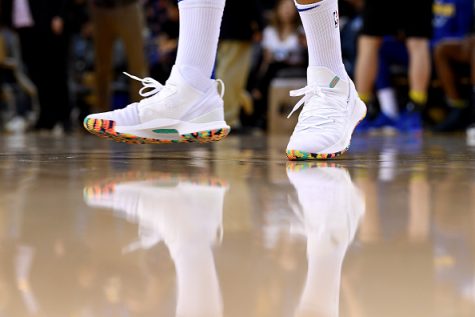 Golden State Warrior, Stephen Curry, sports the Under Armor Curry 5 in a game against the Timberwolves.

Stephen Curry has also made the move to low tops for this season’s model with Under Armour. Hopefully, the lack of ankle support won’t contribute to Curry’s long history of ankle injuries in his career.

Klay Thompson poured, in a league record, 14 three pointers in his Anta KT4’s. Anta is a Chinese sportswear brand.

Puma has returned to basketball floors for the first time in years. They recruited individuals who wanted to build something new. Puma created the Clyde Court Disrupt for their new athletes. The shoes are named after New York Knicks legend, Clyde Frazier, who finished his career in 1980.

PJ Tucker is most famous for sporting the most coveted Nikes and Jordans on the court. He had consumers outside of the game of basketball drooling over what he wore at Madison Square Garden. He got his hands on an unreleased design of “Fear of God” Nikes, designed by Jerry Lorenzo. PJ Tucker was not only the first to debut the designer sneaker on court, but was also one of the few to have them in general.

Jaylen Brown of the Boston Celtics attempts a dunk in the "2004 All-Star Game" T Mac 3's in the home opener. Photo by Jesse D. Garrabrant/NBAE, image from Getty Images

Jaylen Brown channeled the hall of fame career of Tracy McGrady with the Adidas “2004 all star game” T Mac 3. Tracy McGrady wore mismatched shoes in the 2004 all-star game in Los Angeles. The signature model was re-released in 2014, with Adidas’ collaboration with the Packer Shoes sneaker boutique in New York.

De’Aaron Fox is notable for his high top selection of Jordan 28s and Kobe 9s. He rocked an eye catching Kobe 9 “Red Mamba” to compliment the Sacramento purple.

The NBA has added to their entertainment by combining the futuristic uniform designs with vibrant sneakers. There should be no shortage of excitement on players’ feet as Nike continues to introduce new jersey colorways. Limited edition sneakers, new signature models and customs will be a topic of discussion throughout the year.