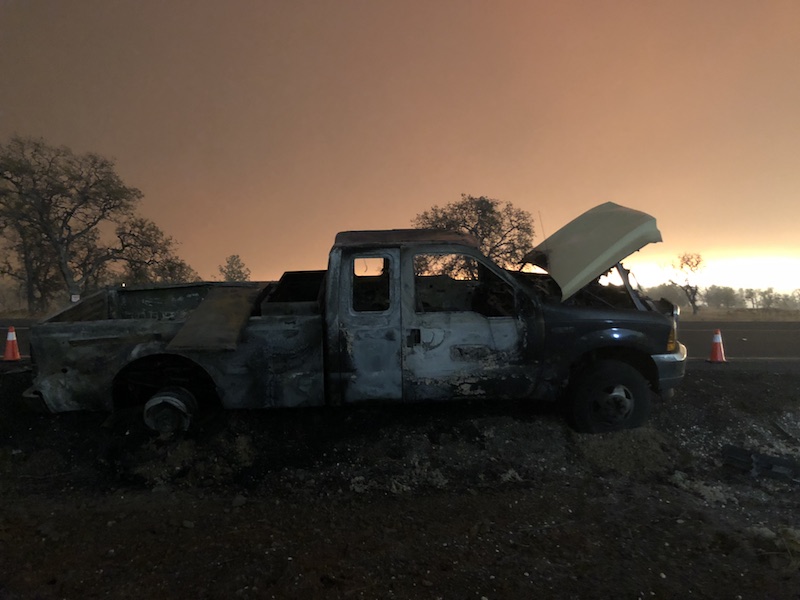 Vehicles were left on the side of the Skyway as the Camp Fire burned through Paradise and forced evacuations into Chico. Photo credit: Natalie Hanson

The Butte County Sheriff’s office confirmed that at least five people in Paradise are known to be dead.

According to a press release by the BCSO Community Relations Unit, the victims were found in vehicles that had been overtaken by the fire. Burn injuries have made it difficult to identify the victims at this time.

For more information, the office is available at (530) 538-7322 to request a welfare check or to file a report of a missing person.

Updated 10:45 a.m. Friday As the Camp Fire burned through Paradise Thursday, firefighters from CalFire all over the state arrived to fight the fire through the night. The fire was reported this morning at about 5% containment, with over 70,000 acres estimated to have been damaged. CalFire and the Butte County Sheriff have stated that there is no current danger to the city of Chico at this time.

— CAL FIRE Butte Unit/Butte County Fire Department (@CALFIRE_ButteCo) November 9, 2018
Evacuation orders were announced Thursday night for areas south of the Chico city limits, including all structures east of Bruce Road, between Highway 32 to East 20th Street. Warnings are also in place in areas such as west of Highway 99 from Highway 149, north of Chico’s city limits to the Midway. CalFire has stated that at 11 a.m., those who evacuated Chico from the designated areas may return. For those who need to check if they are currently in an evacuation zone for the fire, a tool has been provided by Butte County. This article will be updated as more information is available. Natalie Hanson can be reached at [email protected] or @NatalieH_Orion on Twitter.