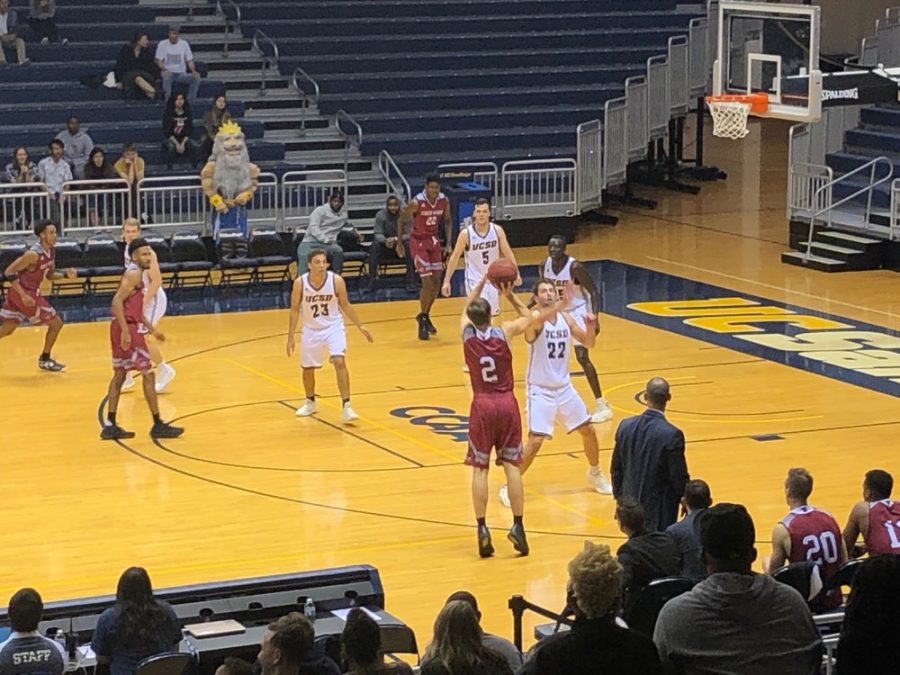 Chico State Guard Calvin Geraci (red) pulls up for the three over UCSD forward Eric Patton (white) during the second half of a game on Saturday. Photo credit: Connor Mcpherson

A series of defensive breakdowns to start the second half proved to be the Wildcats undoing in their season opener, and despite a hard fought battle, Chico lost to University of California, San Diego 84-68 on Saturday.

After a solid first half, CSU Chico looked ready to play down to the wire against the 19th ranked Tritons. Chico State was flowing on offense, their defense appeared to be in rhythm and they were crashing the boards. This provided lots of second chance opportunities to score. However, the team unraveled in the second half, and never picked up momentum for the rest of the game.

A flurry of five Triton three pointers within the first four minutes of the second half were too much for the Wildcats to handle, and gave UCSD a quick 49-30 lead, after going into halftime up by just nine.

This was a clear turning point in the game, causing the Wildcats to take some questionable shots, and give up 50 points in the second half alone. Forward Justin Briggs was upset with the loss, but did have some takeaways.

“We have a lot of guys on our team, and a lot of bench help,” Briggs said. “Each guy can figure out ways to contribute, and some players contributed more than others, but I’m sure we can find ways to get those guys involved, and make it easier on everyone else.”

This game was especially tough for the Wildcats, because it was on the road against the 19th best team in Division II, and it was their first game of the season, while UCSD already had played five. Chico had some games earlier in the season cancelled, due to the Camp Fire, and had to come into this without having had any previous game play. The players seemed to be anxious for their first game, especially Briggs.

“All the guys were really antsy, we were all just trying to get that first game under our belt, and it was just a lot of anticipation just to be able to play a game.” Briggs said. “We were getting our practices canceled, our games canceled, and we were kind of getting discouraged because of that so we were just ready to play.”

The Chico section of the stands were also filled with about 20 or more fans who were excited to get the season started, and despite the final score, none of the them left until the final whistle.