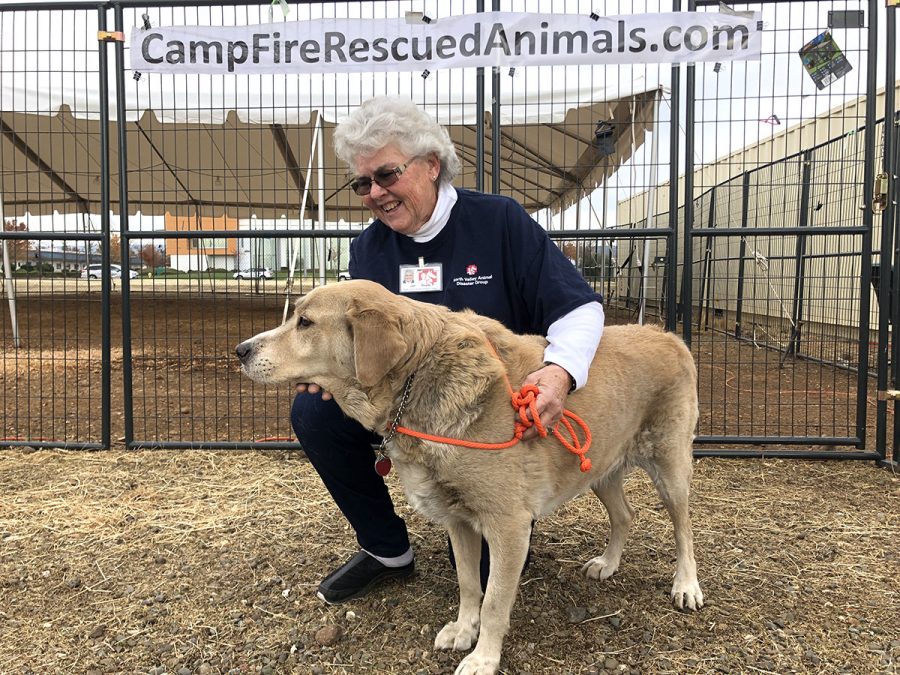 Jan Reale, NVADG volunteer since 2008, with Pericles, one of the sheltered dogs being cared for at the shelter by the Chico Airport. Photo credit: Olyvia Simpson

Thousands of people have been displaced by the Camp Fire, and so have their pets. Hundreds of animals have been rescued from evacuation sites but many are still waiting to be reunited with their owners.

“We are currently in the reunification phase where animals are being picked up by their owners,” said Norm Rosene, the head Public Information Officer for the North Valley Animal Disaster Group (NVADG).

NVADG is an all-volunteer organization that works with Butte County Animal Control to evacuate shelter animals in times of disaster. Other groups from across the nation, like the International Fund for Animal Welfare (IFAW) and RedRover have also come to help.

“We currently have 1,600 animals in shelters,” Rosene said.

Animals sheltered range from dogs and cats to reptiles and even horses. In some cases, the animals have been claimed, but their owners are unable to pick them up.

“We will feed and shelter the animals until the owners have a place to stay and keep their animals,” Janice Rosene, Norm Rosene’s wife, and deputy NVADG public information officer said.

“Our evacuation teams go daily into the evacuation zones to feed and water more than 600 animals that are safely sheltered-in-place,” Norm said. The organization often works alongside firefighters and emergency personnel.

Becki Brunelli is a volunteer with NVADG and runs the website for rescued Camp Fire animals with pictures that people can check to see if their animal is at one of the shelters.

“The community’s support has been outstanding, just with the number of volunteers and all of the resources and money donated,” Brunelli said.

“It’s been really emotional and difficult, but I live for the reunification,” she said.

Those who visit a shelter to claim their animal “must provide photo ID of your pet, describe unique markings or identifiers, or let us know anything else that will help us ID the pet as yours,” according to the NVADG website.

“Helping animals helps people,” Janice said, “and our goal is to reunite every owner with their animals.”

Those who are interested in donating or volunteering with NVADG can find more information on their website, NVADG.org

Olyvia Simpson can be reached at [email protected] or @OSimpson15 on Twitter.