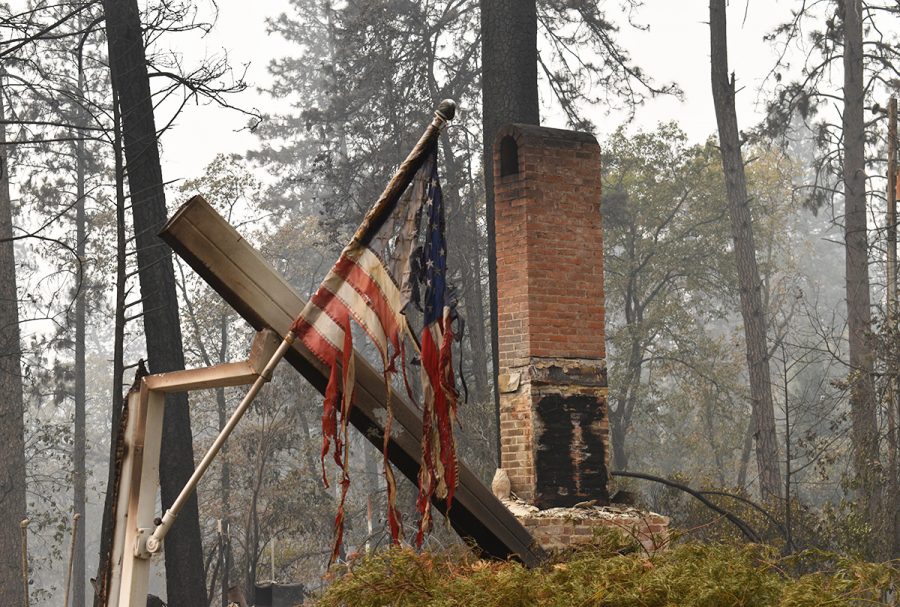 As the sun rose on Thursday, Nov. 8, the sky in Butte County filled with smoke and began to darken. At about 6:30 a.m., fire had ignited in the small community of Pulga and rapidly advanced to Concow, then towards the nearby town, Paradise. By the end of the day, it had become the most destructive wildfire in the history of California.

Shortly after the fire was reported in Pulga, firefighting units were dispatched, but they noticed rapid fire growth and extreme fire behavior taking place, due to unseasonably low humidity and very high winds in the area.

The first evacuation order was tweeted by the Butte County Sheriff at 7:23 a.m. for Pulga. But by that point, the fire was moving so quickly that it was consuming as much ground as a football field per second, according to initial reports from CAL Fire. The sheer speed of the fire prevented many in the community of Concow from leaving, and many had to try to escape the flames on foot. Already named the Camp Fire, the flames were now headed straight for the town of Paradise.

By 8:30 a.m., the huge cloud of smoke from the fire was already visible in Chico. The sky turned a strange pink, then a deep purple, as the deep dark cloud grew. By 10:30 a.m., the fire was everywhere in Paradise, and a deep gridlock was already making it necessary for units to tweet out avoiding the bottom of Skyway at Park Ave in Chico, where many evacuees were entering town.

Communities in Paradise had been ordered to evacuate as early as 8 a.m. However, within the next hour flames had already reached the town limits and were surrounding many residences and streets. The Skyway, a four-lane highway that serves as the main source of transportation from Paradise to nearby towns like Chico, became residents’ only hope to escape but quickly became clogged. Those fleeing their homes encountered gridlock on the limited streets of the town.

As cars inched their way down the road to try to reach safety in Chico, they watched flames rapidly advancing on their vehicles and nearby buildings. Some were forced to flee their cars and escape down the road on foot as heat rose and tires melted.

Those who did reach Chico had to fight increasing traffic to reach the hastily opened shelters in town. The Park Ave off-ramp was closed before noon due to the heavy traffic. Some cars drove around the blockage of the exit from the freeway onto Park Ave in order to reach the evacuation center that had already been set up at Neighborhood Church. The situation was not much better on the east side of Chico, those who used Highway 32 and Old Humboldt to reach Chico at Forest Ave – cars waited hours in bumper-to-bumper traffic as the fire rapidly grew and advanced to the edge of town. By night, evacuation orders would come down for several areas around the town.

By the end of Thursday, it was uncertain which shelters had the capacity for more evacuees. And a new danger seemed more possible – the fire had the speed and size to threaten Chico. Many students and residents left town that night, fearing the worst. Reinforcements for Cal Fire from all over the state arrived in a convoy ready to fight off the flames, as the fire became visible from East 20th St.

By Friday morning, the danger for the town had passed – evacuation orders for south Chico were lifted by 11 a.m. But those who had not left in the night awoke to a nightmarish reality. The skies were dark and thick with orange smoke. To be outside in Chico looked as if a tornado was in the process of consuming the city, and breathing felt impossible already with ash all over the streets. N95 masks quickly ran out at locations such as Collier’s Hardware and other vendors until special orders began to arrive later.

In the days following the evacuation of Paradise, and surrounding areas, road access was cut off to emergency responders, utility workers and credentialed media only.

The death toll continued to rise, day by day, as law enforcement and other agencies, like students and alumni of Chico State’s Forensic Anthropology department, sifted through the ashes, searching for signs of human remains. Reports also started of looting of some of the remaining residencies also started to come in.

The town itself, despite being evacuated of its residents, was still a hub of activity in many places. Pacific Gas and Electric work trucks and employees operated throughout the destructed zones, removing destroyed power poles, and felling trees too far burned near other still standing poles. Fire trucks from across the state criss-crossed the burned areas, keeping an eye on still smoldering patches and ensuring the fire didn’t pick back up. Law enforcement—many also from out of county—patrolled the streets in earnest, checking any unmarked vehicles and turning away those who shouldn’t be there, looking for and arresting would-be looters wherever found.

The fire itself was completely indiscriminate in its path of destruction.

Some streets looked mostly intact, and it wasn’t until going around to the back of many buildings, that damage could be seen. Other streets and blocks were completely leveled. Some residences or businesses stood, looking nearly pristine—aside from the ash from other buildings—oddly surrounded by burned down frameworks on all sides with nothing but brick chimneys, constructed to withstand the heat of fire, remaining as the only indicators that anything had ever been there.

Slowly, the evacuated streets have been completely cleared of burned metal husks of cars that didn’t escape in time and people are being allowed back in to assess the damage for themselves.

Many people and businesses will have a decision to make: rebuild in Paradise and affected areas, or find a new life elsewhere. Even those with houses and business buildings still standing and allowed to return may not have power or other services for weeks or months to come, and the ash in many areas is considered toxic and hazardous, and the clean-up could take even longer. Only time will tell how long the reconstruction of the area will take, and how many of its original residents return.

Natalie Hanson and Josh Cozine can be reached at [email protected] or @theorion_news on Twitter.